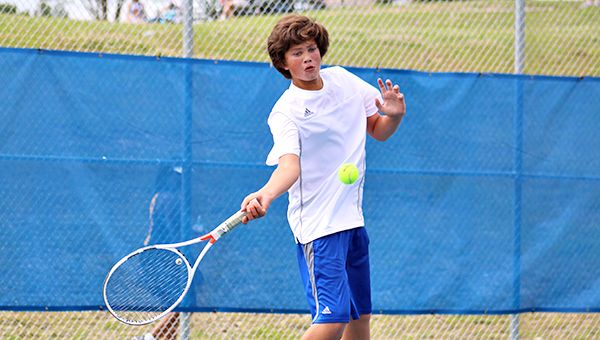 Warren Central’s tennis players took a moment for themselves Monday.

Alex Velazquez and Olivia White won the mixed doubles championship, and five other players clinched spots in the Class 6A state tournament with runner-up finishes as the Vikings had a good showing at the Division 4-6A individual tournament at Halls Ferry Park.

John Robert Jabour (boys singles), George Wilkerson and Jack Richardson (boys doubles) and Laney and Taylor Smith (girls doubles) all advanced to the state tournament May 8-10 in Jackson and Ridgeland. Warren Central will also compete in the Class 6A team playoffs, which is a separate bracket, beginning April 17.

The seven Warren Central players who advanced were the most of any of the four teams in the division. Clinton sent six to the next round, Murrah three and Greenville none. The champions and runners-up in each bracket advanced to the state tournament.

“I would say it was a good showing, with seven of 12 players going to state. I thought this was the most competitive individual district match in the four years I’ve been here,” Warren Central coach Jeff Pilgrim said.

Velazquez and White had little trouble reeling in the mixed doubles championship. They blitzed Murrah’s Kelcie Bolden and Jerry Jackson 6-0, 6-0 in the first round, and Clinton’s Hunter Martin and Kate Camillo 6-3, 6-0 in the finals.

“They were great together,” Pilgrim said.

In boys singles, Jabour won a three-setter from Greenville’s Eddie Wright 6-0, 2-6, 6-2 before running into Clinton superstar Saideep Reddy in the finals.

Richardson and Wilkerson only dropped two games in the first two rounds of the boys doubles bracket, but lost to Murrah’s Cameron Nolan and Vitor Dasilva 7-6, 6-2 in the championship match.

Sisters Laney and Taylor Smith had a similar path through the girls doubles bracket. They breezed past Murrah’s Chandler Wooten and Kelsee Ford in the first round, and then beat Warren Central teammates Amanda Boleware and Lauren Davis 6-3, 6-3 in the second round.

In the championship match, however, the Vikings duo couldn’t get past Clinton’s Jade Bland and Breanna Norton and lost 7-6, 6-3.

“Taylor and Laney played some of the best tennis they’ve played all year,” Pilgrim said. “They were consistent from the baseline and played aggressive at the net.”