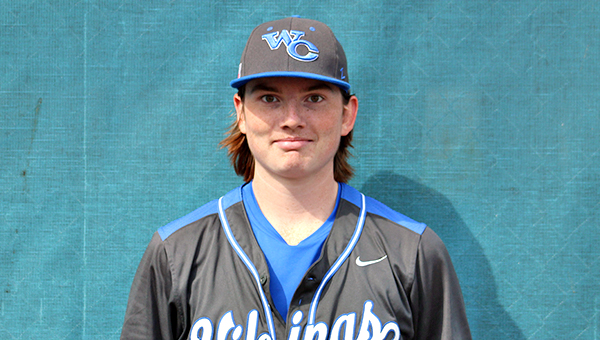 Warren Central relief pitcher Christian Oakes allowed one run in four innings in a 4-3 loss to Clinton on Tuesday. It was the first earned run Oakes has allowed in 10 relief appearances this season.

Adam Moncure hit an inside-the-park home run in the top of the eighth inning, thwarting an earlier dramatic comeback by Warren Central and giving the Arrows a 4-3 victory Tuesday night.

Clinton (16-6, 9-0 Division 4-6A) swept the season series with Warren Central (14-11, 6-3) for the first time since 2011. The Arrows had already secured the Division 4-6A championship with their first two wins this season over the Vikings, who will go into the Class 6A playoffs next week as a No. 2 seed.

“It’s a tough one for sure. We got beat tonight. Great baseball game, Clinton has a good ball club, you just tip your hats,” Warren Central coach Conner Douglas said. “It always hurts losing like that, especially to your rival, but I’m extremely proud of the guys. They competed and battled all night, down to the last out. Sometimes it doesn’t go your way. We are turning that corner, though.”

Clinton took a 3-2 lead in the fourth inning on a more conventional home run, a two-run shot over the right field fence by Walker Burchfield, but couldn’t close out the Vikings.

Caleb Sterling led off the bottom of the seventh inning with a walk and was replaced on the basepaths by Hank Holdiness. Holdiness went to second base on a sacrifice bunt and third on a ground out, and then scored the tying run with Jacob Cochran’s two-out infield single.

Warren Central reliever Christian Oakes retired the first two batters in the eighth inning without incident, and then Moncure hit a sinking liner to right field. WC’s Sean Daily dove for the ball and missed it, and it rolled into the corner. The throw back to the infield kicked away from the relay man and Moncure circled the bases for an inside-the-park home run and a 4-3 Arrows lead.

It was the first earned run Oakes had allowed in 10 relief appearances spanning 23 2/3 innings this season. Oakes took the loss Tuesday, but allowed only the one run and two hits, no walks, and struck out six in four innings.

Logan Stewart started and held the Arrows to two runs in four innings. He allowed three hits and walked one.

“Logan threw well and gave us a chance to win, and Oakes came in and really shut them down minus that one debacle. Oakes has really thrown fantastic for us,” Douglas said. “He’s been huge for us. He’s a competitor and we can give him the ball in any situation. He’s really been lights out all year.”

The Vikings had one last chance to tie it up, in the bottom of the eighth inning. Landon Stewart singled with one out and Vantrel Reed followed with a sharp ground ball up the middle. Clinton shortstop Colby Collier fielded it on one hop near second base, stepped on the bag and threw to first for a game-ending double play.

Warren Central also hit into a line drive double play to end the sixth inning after Reed had doubled with one out.

“We caught a tough break in the sixth and the eighth,” Douglas said.

Landon Stewart finished with two hits and a run scored for the Vikings, and Reed had the one hit and scored a run. Matthew Newcomb had an RBI single in the first inning.

Clinton finished with just five hits, and no player had more than one.

Warren Central will play crosstown rival Vicksburg Thursday at 7 p.m. at Bazinsky Field. It’s their only scheduled meeting this season. WC will then host Madison-Ridgeland Academy Friday at 2 p.m.

In December 2015, NRoute’s Vicksburg Trolley was unveiled with plenty of fanfare. During a cool morning, decked even in a... read more