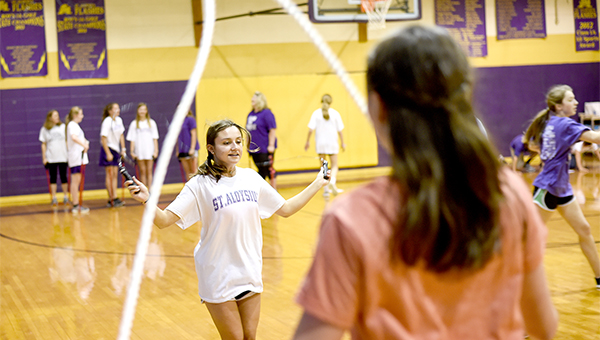 The game may have been called Monopoly, but in this version there were no metal game pieces or paper money. Streets like Park Place and Vermont Avenue were replaced by Lunge Lane and Squat Street.

This version of Monopoly was a fitness workout for students taking part in St. Aloysius’s boot camp for seventh through ninth graders.

The students rolled dice then moved them from station to station where they had to do planks, jump rope, run a lap around the court or perform a variety of other actives.

“It’s been good,” eighth grader Sara Pratt said of boot camp “A little hard, but its getting easier. This is my favorite game because you don’t feel like you’re working out. You have fun.”

Wednesday marked the third week in the six-week program, which takes places for an hour a week during the student’s PE class. They will also be breaking into small groups during health class to talk about issues including body image and what it means to be healthy.

“We thought it would be a great idea to implement it into their PE class,” Kristi Smith, the community outreach coordinator for Vicksburg Catholic Schools, said. “We wanted to emphasize positive body image and not just make this about building muscles and having a cool fit body. That’s not the message we wanted to get across.”

The workouts are run by fitness instructor Amy Gattle and counselor Kara Doiron will help lead the discussion in the small groups.

Even after just a few weeks the students say they are already seeing the positive impacts in their health and fitness.

“It’s been really good,” seventh grader Francis Thames said. “I’ve been doing it, but I got hurt so I had to stop. I’ve gotten stronger and I can run longer.”

They have worked to add strength and stamina while also having fun through a variety of games and activities. Then, in the classroom they work with Doiron and other speakers to apply their lessons and work towards living healthier lives.

“It has really helped us to expand upon what we already do at the school, which is teaching healthy habits,” Smith said. “This particular aspect is all about making healthy choices and strengthening families.”

After the workout, the kids were provided with a healthy snack of grapes and granola to refuel and provide another lesson about healthy eating.

Barbers provide haircuts ‘on the house’