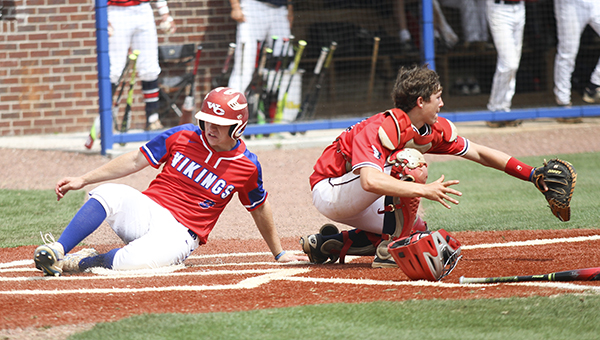 The positive momentum generated by Warren Central’s big rivalry win over Vicksburg on Thursday night evaporated into the heat of the day on Friday afternoon.

Madison-Ridgeland Academy scored three runs in the sixth inning and three more in the seventh to steal a 12-9 victory from the Vikings.

Warren Central had scored twice in the bottom of the sixth, and finished with 10 or more hits for the third time in four games, but couldn’t hold a late lead. It lost for the third time in four games heading into Monday’s regular-season finale at home against Germantown, and then the start of the Class 6A playoffs next weekend.
Warren Central will face either Starkville or Callaway in the first round.

“Walks and errors, and then they would get a hit. Error then walks and then a hit. Story of the year,” Warren Central coach Conner Douglas said in summing up Friday’s loss. “We have to get better in those regards if we want to make a run.”

Tyler McRight, Matthew Newcomb and Vantrel Reed each had two hits for Warren Central (15-12).
Logan Stewart drove in four runs and Newcomb had three. Newcomb has now hit safely in eight consecutive games, and has five hits and eight RBIs in his last two.

Douglas praised the offensive effort, but added that this latest loss was frustrating after the Vikings seemed to have turned a corner over the last two weeks.

Before the recent slump they had won five in a row. On Friday they made three errors and struggled all day to gain traction against an MRA team that is well below .500 and had lost four in a row before coming to Viking Field.

“Aggravating is the word,” Douglas said. “We have been there and can make these types of plays in our sleep. That’s why it’s so frustrating. We are much better than that.”

Lady Vikes blown out by Brandon