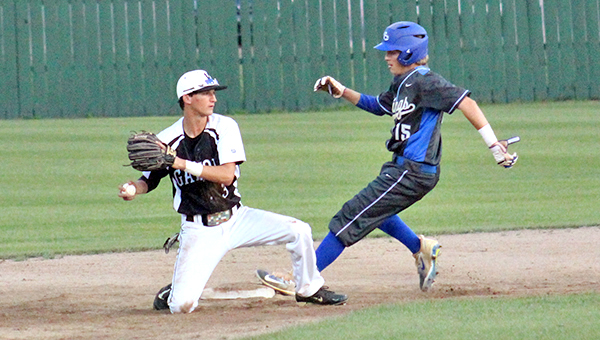 After suffering two losses in a row, Warren Central came to Bazinsky Field Thursday night looking to get things back on track and build some momentum in the last weekend of the regular season.

Matthew Newcomb went 3-for-4 with a double and five RBIs, Morgan Jarabica doubled in two runs and pitched three solid innings, and the Vikings beat up on crosstown rival Vicksburg High 13-1.

The Vikings had 12 hits and scored in four of the game’s five innings.

“Losses or not, I like the way we’ve been playing,” Warren Central coach Conner Douglas said. “We’re swinging the bat. We’ve talked about getting better each game, which I thought we have minus one bad game defensively against Madison. So I like where we’re going. We’re building off of it for the playoffs. We want to peak at the right time, not midway through the year.”

It’s the ninth consecutive win in the Warren Central (15-11) in its long-running series with the Gators, and helped it shake off back-to-back losses to Madison Central and Clinton. The Vikings will host Madison-Ridgeland Academy Friday at 2 p.m., and Germantown Monday at 7 p.m. They’ll open the Class 6A playoffs next Friday against either Starkville or Callaway.

Vicksburg (7-14) will host Terry Friday at 1 p.m. and is at Clinton Monday night to finish the regular season. It’ll play Grenada in the first round of the Class 5A playoffs beginning next Friday.

The Gators have endured plenty of self-inflicted wounds this season, and that played a role in their latest loss as well. An error on a hard-hit grounder by Newcomb in the first inning brought in WC’s first two runs, and Vicksburg’s outfielders lost two balls in the lights during a five-run third.

One of the misplayed fly balls resulted in an RBI double off the base of the left field wall by Oldenburg, and Jarabica followed with the other that became a two-run double. The big third inning put Warren Central ahead 10-1.

“You can’t give good teams outs, and we did that tonight. I thought our pitcher pitched very well, but we had no defense behind him,” Vicksburg coach Derrick DeWald said. “How we lost two balls in the lights, I have no idea. We’ve played here all year long. Good teams are going to make you pay when you give them extra outs, and that’s what they did. I don’t want to take anything away from (WC). They made us pay.”

Newcomb was the hitting star of the night, but eight of Warren Central’s nine starters scored a run. Newcomb had a pair of two-run singles and an RBI double, and extended his hitting streak to seven games.

“It just happens every now and then where you see it good. Sometimes you see it, sometimes you don’t,” Newcomb said. “Whenever you get a leadoff hit, it’s hard not to keep it rolling. The leadoff person gets a hit and it gets everybody in the mood. I don’t know if it’s just everybody seeing it well or just a train rolling, but it’s hard to stop. It’s definitely making us feel better for the playoffs next week.”

Jarabica pitched the first three innings and allowed one run on three hits. He walked one batter and struck out three.

Colin Standish pitched the last two innings and didn’t allow a ball out of the infield. He struck out four and got the other two outs on weak grounders between first base and the mound. Standish fielded both grounders, flipping to first for one out and tagging a runner on the other, to give him a hand in all six outs during his perfect outing.

Vicksburg’s only run came in the second inning, when Gage Ederington led off with a single and scored on a double to the gap in right-center field by Branden Humphrey.

Chandler Luke singled in the first inning for the Gators’ other hit.