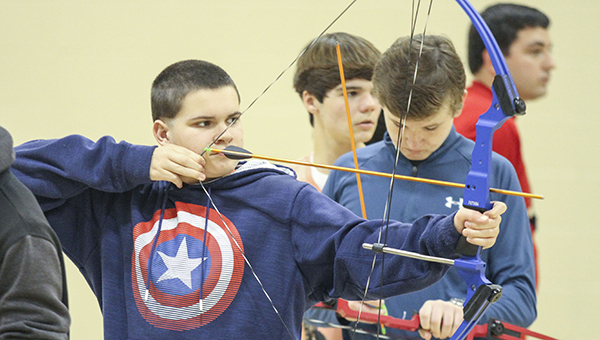 Chase Hill aims his bow during practice with the Warren Central archery team. Hill, who has autism, competed with the team this season and posted a score of 210 at last week’s state tournament in Jackson. (Courtland Wells/Vicksburg Post)

A Warren Central student who has autism is beating the odds by competing in a varsity sport.

Chase Hill, 14, is a member of the school’s archery team, a sport he found he excelled in just a couple of years ago.

His archery interest began when he attended Camp Silvercloud two years ago. At the two-day camp sponsored by the Junior Auxiliary of Vicksburg and held at Warner Tully, campers who have mental or physical challenges get to have a real camp experience with various activities. Chase quickly came to enjoy archery.

“He had never really picked up a bow and arrow until then. He missed the first one because he didn’t know what he was doing and then the next nine times he hit the target, in a row,” his mother Deann Hill said. “He seemed to enjoy it. He seemed to have an instinct for it.”

His sense of fulfilment and natural talent for the sport had his mom willing to invest in quality equipment to further his hobby and work toward trying out for the high school team. Since he was too young to join the team last year, the freshman practiced in his backyard with his father Charles Hill in preparation for this year’s season.

Once tryouts began, Chase was ready to give it his all. Around 50 students tried out, and Chase’s ability was enough to earn a spot on the team.

Hill steadily improved over the course of the season and posted a score of 210 out of a possible 300 at the Archery In Mississippi Schools State Championship last week. That ranked in the middle of Warren Central’s 34-person roster, and helped the Vikings to a fourth-place team finish out of 17 Class 6A schools.

Having their son on the same level as his peers is not something his parents have gotten to experience very much in his 14 years. Deann Hill said Chase tried other sports but never took to any of them. Making the archery team lifted the spirits and confidence of the whole family, Deann Hill said.

She is proud her son has found a sport where he thrives.

“He’s very focused with it. I think it’s good for him,” Deann said. “I think it helps him focus a little bit. It helps him calm down.”

Deann Hill said the structure of the sport has been very beneficial for Chase. As a safety measure, the coaches blow a whistle to signal what the athletes are supposed to do and when. She likes the way Brewer interacts with Chase and called him an “awesome” coach. Brewer said Chase takes coaching very well.

“Autistic kids like structure,” Deann said. “You do it the same way every time. I think that really helps him.”

For the first month of practice, a teacher or Deann would be in the gym watching the team prepare. After the first month his teacher, Jennifer Cain, decided to let him go to practice solo and he gave no objection.

“I’m just really proud of him,” Cain said. “He made it because he earned it.”

Cain said she almost sees a different student when Chase is shooting.

“He’s just so focused,” Cain said. “It’s really taught me a lot on how to keep him more focused on certain things in the classroom. It’s definitely a good motivator.”

Deann said Chase doesn’t talk much, but once when a practice got postponed, he came home asking to shoot his bow.

Mellon: Think we serve a purpose