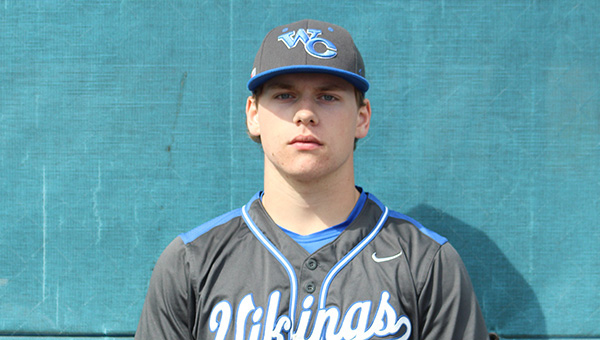 Warren Central’s Sean Daily went 3-for-3 in a 5-1 loss to Germantown on Monday.

Warren Central’s late-season slump resumed Monday, and now the Vikings are out of time to play their way out of it before the postseason begins.

Mark Smith’s RBI double snapped a tie in the fourth inning, and Germantown went on to beat Warren Central 5-1 in their regular-season finale. It was WC’s fourth loss in five games heading into its first-round Class 6A playoff series that starts Friday against either Starkville or Callaway.

WC’s playoff opponent is yet to be determined. Northwest Rankin was banned from the postseason for using an ineligible player in 2016, but is appealing the Mississippi High School Activities Association’s ruling. The MHSAA is expected to deliver a final decision Tuesday or Wednesday.

Warren Central (15-13) used a pitcher-by-committee approach in Monday’s game, with four hurlers each throwing one or two innings. Germantown (21-6) got to No. 3 in the line, Morgan Jarabica, by roughing him up for four runs in the fourth and fifth innings.

Eric Newsom led off the top of the fourth with a single. Courtesy runner Jonathan Boone stole second, and scored on Smith’s double two batters later. Carson Fisher followed with an RBI single and later scored on another single by Collin Magoun to make it 4-1.

Newsom drove in another run with a groundout in the fifth inning to bring in Germantown’s last run. He also started on the mound and pitched five innings, allowing one run on three hits while striking out two.

Magoun finished 3-for-3 for the Mavericks, with one RBI and one run scored. Connor Carter also had three hits.

Sean Daily went 3-for-3 for Warren Central. The Vikings’ lone run came in the second inning, when Caleb Sterling led off with a walk and eventually scored on a fielder’s choice by Tyler McRight.

Aaron Greene started on the mound for the Vikings, but only pitched one scoreless inning before giving way to the bullpen. Christian Oakes allowed one run in two innings of work, and Colin Standish finished up with two scoreless innings.