Game 1 gets away from Missy Gators 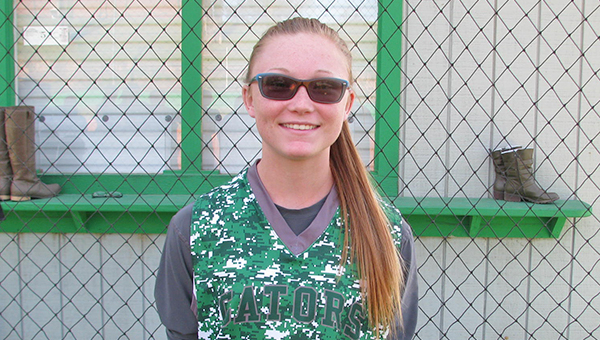 Vicksburg High’s Kayla Foster had an RBI single and pitched six innings in a 9-7 loss to Center Hill Thursday in the Class 5A softball playoffs.

For one inning they did not, and that’s the one that cost them.

In the bottom of the sixth inning the Missy Gators committed three errors, gave up two run-scoring doubles to Taylor Milligan, and allowed seven runs. It was a rough half-inning that let Center Hill overcome a five-run deficit and win 9-7 in Game 1 of their first-round Class 5A softball playoff series.

Game 2 of the best-of-three series is Friday at 4 p.m. at VHS. If the Missy Gators (6-12) win, a decisive Game 3 will be played immediately afterward.

“Pretty good for five innings. Bad sixth inning,” Vicksburg coach Brian Ellis said. “We did a really good job defensively through five innings. Kayla (Foster) did a great job hitting spots pitching. We got a lot of ground ball outs. We had opportunities to get more runs, but just didn’t get it done at the plate when we needed it.”

Vicksburg never trailed in the game until the fatal sixth inning. It scored two unearned runs in the top of the first inning, and then struck for five runs in the fourth inning. Foster had an RBI single and two errors allowed the Missy Gators to take a 7-2 lead after Center Hill (16-9) had tied the game.

In the bottom of the sixth, the roof caved in on the Missy Gators.

Katelyn Moss got things started with a double, and scored on Milligan’s first RBI double of the inning. Milligan then scored on a single by Breanna Scruggs to cut it to 7-4, and Scruggs later scored on an error.

Two more errors brought in the tying runs and brought the lineup back around to Milligan. She doubled to left field to plate two runs and put the Mustangs in front for the first time, 9-7. They shut down the Missy Gators in the seventh to take a 1-0 series lead as well.

Milligan finished 3-for-4 with four RBIs. Moss, Center Hill’s pitcher, had two hits and scored two runs and also racked up 10 strikeouts in the circle.

Sara Daniels went 1-for-4 with a single, RBI and two runs scored for Vicksburg. Foster and Bethany Martin both drove in one run and scored another. Gracie Emerson also finished with one hit and one RBI.

In the circle, Foster pitched six innings and allowed nine runs, only four of which were earned. She struck out one batter and walked one.

Center Hill committed four errors of its own. Only seven of the 16 runs scored in the game were earned.

Community urged to rally with the United Way in…