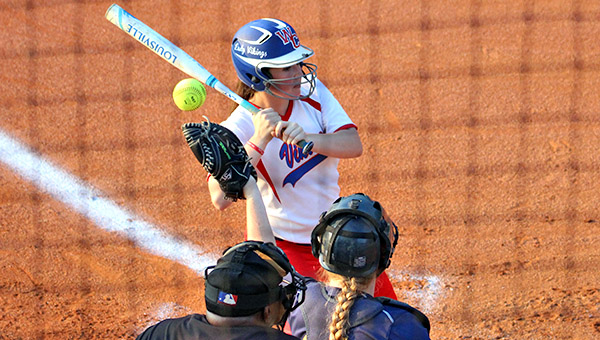 Warren Central’s Ashley Coley backs away from a high, inside pitch in the first inning of Friday’s playoff game against Olive Branch. The Lady Vikes lost, 5-4, in Game 1 of the best-of-three series. (Ernest Bowker/The Vicksburg Post)

Warren Central’s softball team took a step in the right direction Friday night, but also one step closer to the edge.

Olive Branch scored five unearned runs, including two on a botched fielder’s choice in the fifth inning that turned out to be the difference, and beat Warren Central 5-4 in Game 1 of a first-round Class 6A playoff series.

It was a better showing for the Lady Vikes (10-14) than their previous outing, a run-rule loss to Florence, but still pushed them to the brink of elimination. They need to sweep a doubleheader Monday at Olive Branch (5-14) to keep their season alive.

Kelsey Lockridge had two hits, reached base four times, scored a run and hit an RBI double for Warren Central, which held the lead twice at 2-0 and 4-3 before losing it for good.

Olive Branch loaded the bases with one out in the top of the fifth inning, and WC pitcher Madison Wade got Madison Turner to hit a sharp grounder to short. Cocoa Fultz fielded it clean and fired home to try and get the lead runner.

Fultz’s throw was low, however, and catcher Laura Reagan Logue was unable to handle it. Emma Selvera scored the tying run, and Danna Sullivan alertly hustled home with the go-ahead run when the ball kicked away from Logue as the Conquistadors took a 5-4 lead.

Warren Central had several chances to regain the lead in the later innings, but couldn’t get a clutch hit. The Lady Vikes left six runners in scoring position in the fourth, fifth and sixth innings and were retired in order in the seventh.

“It was just having people in who aren’t used to having to come up to bat in that situation because we’re down three or four starters,” said Warren Central cach Dana McGivney, who was missing four starters from the lineup because of injury.

“Taking that into consideration, I still think we played OK,” McGivney added. “I still think we should have won the game. We made some errors that we shouldn’t have made. But we’re playing better, and that makes for a more confident Monday when you know you’ll have some of your players back and have a chance.”