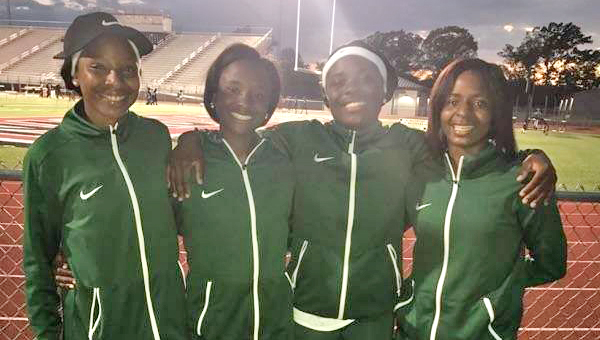 The team of Taylor Gray, Mikayla Banks, Shadia Cain and Kiona Patton won both the 4×100 and 4×200 meter relays at the Region 2-5A meet at Germantown High School. The quartet also won in both events at the Division 4-5A meet last week and advanced to the third round of the MHSAA’s track and field postseason, the Class 5A North State meet April 29 at Oxford High School.

The top four finishers in each event advanced to the next round, and Vicksburg had plenty of athletes moving on.

Gray and Patton finished third and fourth, respectively, to advance in the girls’ 100 meter dash. Cain teamed with Brashayla Thomas, Char’Davia Anderson and Jamiracle Williams to finish second in the 4×400 meter relay.

Williams and Thomas both advanced in the 400 meters and the high jump, while Anderson and Jordan Davis got through in the 100 and 300 meter hurdles.

Deshawn Calvin was fourth in the 100 meters and teamed with Nicholas Barnes, Marlon Hodge and Jamal Jefferson to place third in the 4×100 meter relay.