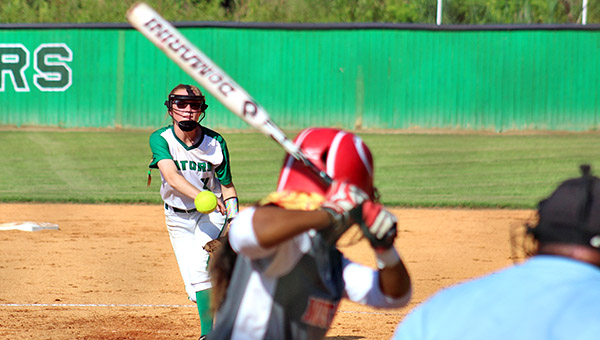 In Game 1 of their playoff series against Center Hill, it was one bad inning that cost the Vicksburg Missy Gators a win.

Sara Spencer went 3-for-3 with two doubles, three RBIs and two runs scored, Erin Holmes drove in three runs, and Center Hill scored in every inning to beat Vicksburg 13-3 Friday and complete a two-game sweep in the first round of the Class 5A softball playoffs.

It’s the first time in three seasons that Vicksburg (6-13) has not advanced beyond the first round of the playoffs.

“We weren’t ready to play. I don’t know how else to say it,” Vicksburg coach Brian Ellis said. “We’ve showed signs of being a really good ball team and signs of being not so good. Hopefully we’ll work in the offseason and be willing to compete and make the playoffs next year and win some games.”

Center Hill (16-9) needed a seven-run rally in the sixth inning to beat the Missy Gators 9-7 in Game 1, but it was in control from the outset in Game 2.

Laila Armstrong led off the game with a single and scored on a triple by Emily Spencer to give the Mustangs the lead just two batters into the game. Spencer scored on an error and Holmes had an RBI single later in the inning to make it 3-0 before the first Missy Gator even stepped into the batter’s box.

Center Hill scored three more runs in the second inning — two of them on a single by Sara Spencer — to blow it open and steadily added to the lead until it ended after the sixth via the run rule.

Vicksburg didn’t score until Felicity Delgado singled in a run with two outs in the bottom of the fifth inning to make it 10-1. Center Hill then scored three runs in the sixth and kept the Missy Gators from forcing another inning despite an unearned run and an RBI single by Kayla Foster that cut it to 13-3.

Foster finished with two hits, as did teammate Markayla Chiles.