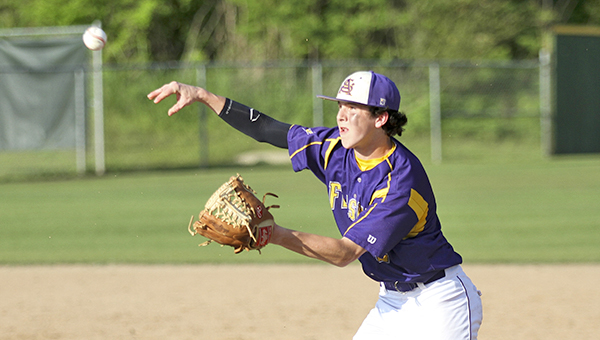 St. Aloysius' Thomas Trichell throws to first base during the first game of a doubleheader against Park Place on Thursday. St. Al won both games, 13-3 and 6-4. (Courtland Wells/Vicksburg Post)

The St. Aloysius Flashes did what they needed to do to make the MAIS Class AAA baseball playoffs. Now they have to wait and see if it was enough.

The Flashes swept a doubleheader Thursday at Bazinsky Field against Park Place Christian, 13-3 and 6-4, to keep pace in a four-way race for the second and final playoff berth from District 3-AAA.

“I’m so proud of the effort and intensity our guys played with tonight,” St. Al coach Sid Naron said. “They knew our only shot to get in the playoffs was to win two today and they played so hard and got it done. The rest is out of our hands. I’m so proud of these seniors and what they’ve done, and hopefully get to prove it next week.”

St. Al got the job done in game one of Thursday’s doubleheader by hitting the ball. It banged out 11 hits, including two each by Landon Middleton and Garrett Breithaupt, to win 13-3.

Josh Collins pitched a five-inning complete game and also contributed a double at the plate.

In game two, the Flashes won 6-4 as Jake Pierce hit a go-ahead RBI single in the sixth inning.

Thomas Trichell had two hits, while Middleton had a double and also pitched 3 1/3 innings to lead a balanced effort from the pitching staff. Breithaupt pitched 2 2/3 innings of relief and James Trichell one. Trichell got the win.