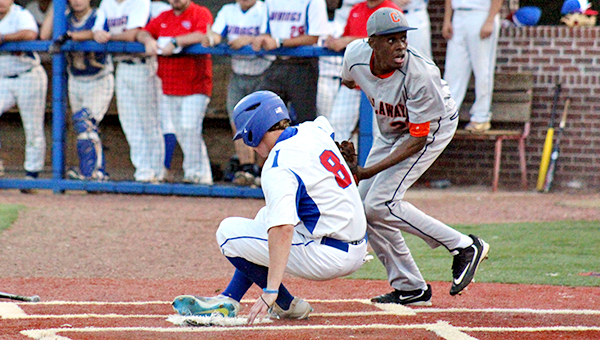 Warren Central wasn’t so much off its game Thursday night as it was caught off-guard.

For two innings, the Vikings couldn’t get a handle on Callaway left-hander Albert Hughes. The Mississippi Delta Community College signee retired six of the first seven batters he faced and gave the small early-evening crowd at Viking Field a moment of pause.

Eventually, however, Callaway’s defense let Hughes down and the Vikings perked up. They scored four unearned runs in the third inning to finally gain some separation and get Hughes out of the game, and went on beat the Chargers 10-0 in Game 1 of their Class 6A playoff series.

“I don’t think there was ever pressure, I just don’t think we were expecting to see that good of an arm,” WC coach Conner Douglas said of Hughes. “I liked him a lot. He was a good player and competed, and made good pitches when he had to. He stayed ahead in counts. I don’t think it was anything we were doing wrong, it was just things he was doing right.”

Warren Central (16-13) can close out the best-of-three series in Game 2 Friday at 4 p.m. at Smith-Wills Stadium in Jackson. It’s likely they’ll once again see Hughes, who was pulled after throwing 57 pitches in 3 2/3 innings. He struck out five and only allowed two hits, but got no help from his defense.

Callaway committed four errors in the bottom of the third inning, leading to four unearned runs that broke a scoreless tie.

Hughes was replaced by Avery Jackson after striking out the first two batters in the fourth inning. Jackson got out of the fourth without any trouble, but gave up five more runs — all unearned — in the fifth inning.

Callaway committed one error in the fifth, and two runs scored on wild pitches. One of the Vikings’ three hits in the inning was a two-run triple by D.J. Lewis on a high fly ball to right field that landed at the base of the wall and just missed going over the fence.

“I thought it was out, but then I saw it go in the air a little bit and I didn’t square it up like I should. I never hit it that far, so it was a little bit disappointing that it didn’t go out,” said Lewis, the Vikings’ leadoff hitter. He has never hit a home run in his high school career.

Warren Central tacked on one more run in the bottom of the sixth inning to finish the game via the 10-run mercy rule. Grayson Shealy led off with a walk and eventually scored on yet another error on a misplayed grounder.

While Hughes was keeping the Vikings in check in the early going, WC’s Christian Oakes was matching him pitch for pitch. Normally a reliever, Oakes got the start in Game 1 and threw five scoreless innings.

Oakes struck out five, walked one, and gave up six hits but only a few hard-hit balls. Callaway’s only real scoring threat came in the first inning, when it loaded the bases with one out. Oakes got Jordan McDonald to hit a tapper back to the mound. He fielded the ball and flipped to catcher Tyler McRight who stepped on the plate and fired to first for an inning-ending double play.

“He just did what Oakes does. He goes out there and competes and throws strikes and gives us a chance. If we don’t make those errors, his pitch count doesn’t get up so high and we have a chance at the end,” Douglas said.