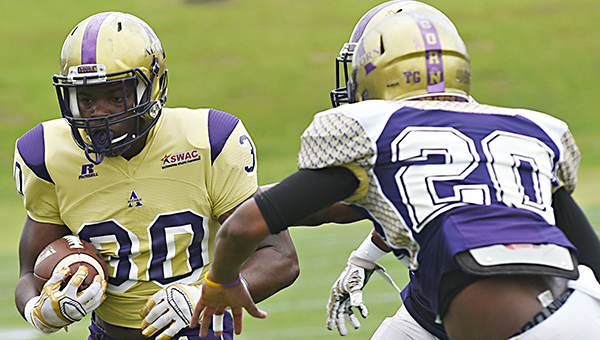 By Emmalee Molay
The Natchez Democrat

LORMAN — Alcorn State football head coach Fred McNair seemed satisfied with his team’s efforts during the annual spring game Saturday, despite the absence of 18 players who were arrested early in the week and absent from the game.

Without the missing players, who were involved in an on-campus brawl on April 10, Alcorn fielded just one offensive and one defensive team. They went through a series of non-contact offensive drills for approximately 40 minutes before running about 40 plays of 7-on-7.

McNair said he is unsure of what official punishments the university will issue to the arrested players — the list of whom includes a number of starters on both sides of the ball — but he will abide by the whatever the final decision turns out to be.

“Whatever the school puts up, we will have to abide by those rules,” McNair said. “Anybody who has been a football player or a student on campus knows that things like that happen. It’s no problem. We will handle that.”

McNair also said he doesn’t think the recent violations have given the rest of Alcorn’s football team anything to worry about and said he has been urging them to be aware of their presence and surroundings on campus.

“These guys don’t have distractions, they are just regular football players that are going to come out and compete every day,” he said. “When they come out here they kind of isolate themselves. I told them to be careful of what you do because you are a part of this university.”

All of the players arrested were charged with misdemeanors that ranged from malicious mischief to simple assault.

One player, quarterback Cleveland Ford, announced this week that he would transfer after enrolling early at Alcorn.

“Me personally, I just didn’t want to associate myself with that and what they have going on,” Ford told the Sun Herald on Thursday. “Nobody is looking at it as a big issue, but it is to me and my family. They just don’t feel safe with me being in this environment.”

Of the remaining Alcorn players that participated in the spring game, four quarterbacks each received an opportunity to lead one drive.

“Harper has made large steps at quarterback and doing what needs to be done,” McNair said.

Footman wasn’t so lucky on his offensive possession, as he was intercepted by junior defensive back Brady Smith.

“Today’s game was really kind of fun for me because we have been working toward it all spring practice,” Smith said. “(The pick) felt like money to me. I like making the big plays.”

Smith also said he is concerned with the attention his team is receiving from outside sources in the wake of the brawl and arrests.

“We have to just stay focused,” he said. “We have to worry about us and what we have to do.”
Alcorn State will play its season opener Sept. 2, at home against Miles College.