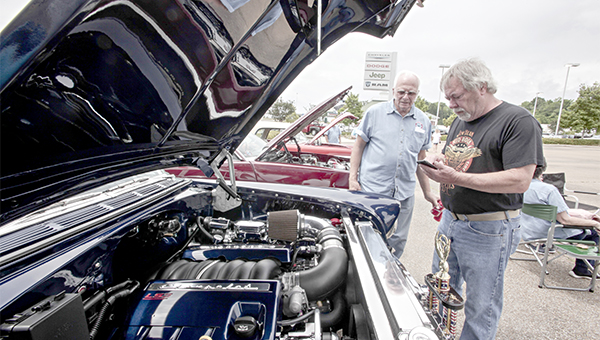 The threat of rain led to a smaller turnout than previous years, but the event succeeded in its goal of raising money to support the Haven House.

Club president Pete Dionne said they have a vote every year before the show to decide who to donate to, and every year the vote is unanimous in favor of Haven House.

“We had close to 40 cars show-up along with walk-ins with chairs. Actually had an enjoyable two-hour movie watching “Cars.” The weather was able to hold out a little bit to keep the show going.”

The car show started at 8 a.m. Saturday and ended at 1:30 p.m. after the presentation of awards. Best in show was awarded to a 1955 Chevrolet Nomad.

All profit from the entry fees Friday and Saturday and concession sales are donated to support Haven House, a shelter for women that are victims of domestic violence.

“It really helps us out,” Haven House executive director Georgia Grodowitz said. “There are so many things that we can use that money for that are unforeseen expenses and costs to help people that come in and are victims of domestic violence.”

Haven House also raises money during the event through the sale of hamburgers and hotdogs. The proceeds from Saturday haven’t been totaled, but Grodowitz said they typically raise more than $2,000.

“The car show went great, especially considering the forecast,” Grodowitz said. “We weren’t too sure about the rain, but it’s been a beautiful day and we did well.”

The money raised from the car show is used by Haven House to cover expenses that grant money cannot be used toward.