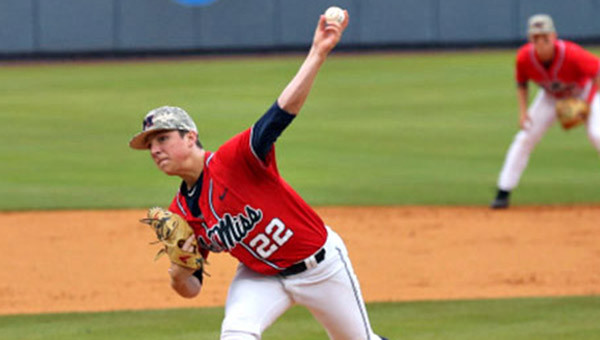 OXFORD — Ole Miss freshman Ryan Rolison was a little wobbly early, but the Missouri Tigers never found the strength for the fatal shove.

Rolison moved up a day in the rotation and pitched six scoreless innings to lead the Rebels to a 3-1 victory Saturday afternoon to even their Southeastern Conference series. David Parkinson, the regularly scheduled Game 2 starter, was scratched with a stomach bug.

For a second straight week Ole Miss followed a lopsided game one loss with a game two win. The series will be decided Sunday at 1:30 p.m. Parkinson is expected to start, Ole Miss coach Mike Bianco said.

Missouri had just one hit until the ninth Saturday, when Ole Miss closer Dallas Woolfolk gave up a home run to three-hole hitter Trey Harris. It was the 12th home run of the season for Harris.

Rolison got a text message at 8:30 a.m. from pitching coach Carl Lafferty that told him he would start.

“I woke up thinking I was throwing on Sunday, and I had to get mentally ready. There are always going to be changes,” he said.

Will Ethridge pitched two hitless, scoreless innings between Rolison and Woolfolk.
Rolison made his fourth SEC start and improved his control as the game went along. He walked five but struck out a career-high nine batters and lowered his ERA to 1.88.

He issued four walks in the first two innings. The Tigers (27-13, 8-9 SEC) didn’t put a ball in play until the third and didn’t get their only hit against Rolison until the fifth.

“I was rushing with my body a little bit. It kind of got in my head. I tried to over throw a couple of times and tried to under throw too,” Rolison said.

The Rebels (24-15, 8-9) got some two-out magic in the fifth. Tate Blackman walked, and Will Golsan and Colby Bortles followed with hits, the latter driving in two runs.

Ole Miss didn’t get the first of its five hits until the fourth inning, when Ryan Olenek led off with a double. The Rebels, though, scratched out a run with a walk and two hit batsmen against Missouri right-hander Tanner Houck. The run scored on a ground ball by designated hitter Tim Rowe.

Monarchs club USM to even series