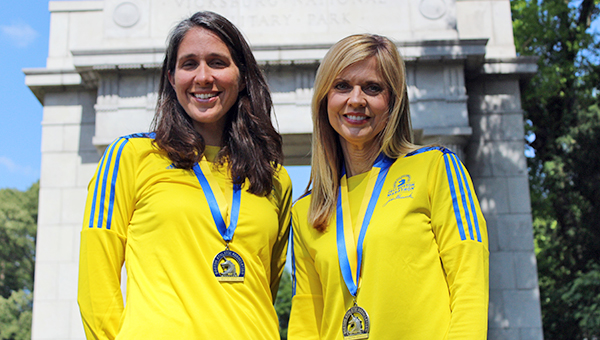 “They’re really hard, it takes a lot to train and you put all that effort into one day,” the 38-year-old Vicksburg resident said. “And I don’t like big races where there’s all this hullabaloo.”

So, naturally, there Hall was last Monday, packed into an aptly named corral like cattle with a couple thousand other runners awaiting the start of the biggest and most famous marathon in the world.

Hall spent the next 3 hours, 44 minutes and 23 seconds traversing 26.2 miles of streets and hills while competing in the prestigious Boston Marathon for the first time. It was a bucket list item for the runner who has been a regular winner on the Mississippi Track Club’s 10K circuit, as well as a way to give her daughter Gloria a treasured gift.

“I’m getting slower than the qualifying times and if I was going to do it I knew I had to do it now,” Hall said. “Another part of it is the unicorn. It’s in the Boston Marathon logo and on the jacket. My daughter is going through a unicorn phase and I had to get her a jacket with the unicorn on it.”

For her Boston debut, Hall had plenty of help from her mother who drove in from Texas to watch Gloria and her son Sam, and guidance from another Vicksburg resident who has become a grizzled veteran of the race.

Beth Krapac competed in the Boston Marathon for the fifth consecutive year. She and Hall were the only two runners from Vicksburg among the 30,074 entrants this year, and they trained together for several months to get ready.

It’s not the first — or last — time Krapac has taken a fellow runner under her wing. In 2015 she trained with friends Bryan Register and Tom Lilleyman for the race. She already has a request from another friend, Ashley Mason, to help her train for 2018, and Krapac and some other runners have “made a pact” to run Boston together in 2019.

“I’m always getting ready to run Boston. For the past three or four years, everybody around me has been training to get ready to qualify for Boston,” said Krapac, who will turn 53 in May. “It never really dawned on me that this was my fifth one and I should have some words of wisdom. When people there heard I’d done it a few times and asked for advice, I told them it’s all about the moment. Enjoy the moment and try to carry each other, and don’t over run the first five miles.”

Once they got ready to run in Boston, however, each woman was on their own. Because there are so many runners of varying skill levels, they’re separated into “corrals,” or groups, based on their qualifying time and starts are staggered to spread out the pack. Hall and Krapac wound up in different corrals and didn’t see each other until after the race.

For the rookie Hall, the atmosphere was almost overwhelming. The Boston Marathon is held on Patriots Day, a state holiday in Massachusetts, and thousands of residents line the city’s streets to cheer on runners as they pass through their neighborhoods. Many families tailgate and throw house parties for the race, just like they would for a football game.

“The experience is like nothing I’ve been to. This enormous city shuts down — and it shuts down not just for the elite runners, but for the mediocre runners like me. It was incredible,” Hall said. “Everybody takes the day off and celebrates with you. You don’t want to let them down. They’re tailgating for a bunch of runners.”

Krapac, whose first trip to Boston came when terrorists set off a bomb at the finish line in 2013, said she’s learned to soak in the festive atmosphere.

The race itself was difficult for both Hall and Krapac. Hotter than expected temperatures sapped the strength of both women as they made their way through the course.

“It wasn’t quite what I had trained for. Considering the conditions, it was as good as I could have done. It was warmer than what I expected,” Hall said. “I might have gone into it with too much confidence. I said, ‘I’m from Mississippi and I trained on hills. How bad can it be?’ I got halfway into it and it was hillier and hotter than I expected.”

“People were stopping in the middle of the race and running into each other,” Krapac said. “Of the five I’ve done, I’ve never been this hot. You could smell the hot pavement.”

The two Vicksburgers persevered, however, and conquered the course. Hall finished in 10,998th place overall and 3,339th in the women’s division, her time better than nearly 20,000 other competitors.

“This is the most tired I’ve ever been. It’s been real tough trying to stay at this level,” Krapac said.

Krapac, however, qualified for the 2018 Boston Marathon based on this year’s time and said she probably will, in fact, stay at that level to be ready for another go.

“Right now, when I drop something on the floor, I can’t bend down to pick it up,” she said a couple of days after the race. “I’m qualified by over 12 minutes, so I’m pretty sure I can get back in. It’s like this man told me, you should go back until you can’t. So most likely, I will go back.”

Hall wasn’t so sure about herself.

“I don’t know if I’m ready to make that decision yet,” Hall said with a laugh.

Even if she’s one-and-done in Boston, Hall said it was a great feeling to come down the final stretch and achieve one of running’s holy grails.

“I’m a fan of this race, so every year I watch the elites finish on TV and track my friends. Once I was on that blue pavement (at the finish line) it was amazing,” Hall said. “When you get less than a mile from the finish line there’s a three-stripe line leading to the finish because Adidas is a sponsor. There’s people surrounding you and yelling, and the street is echoing with people screaming. You feel like an Olympian, even though the Olympians are done and on the plane home.”