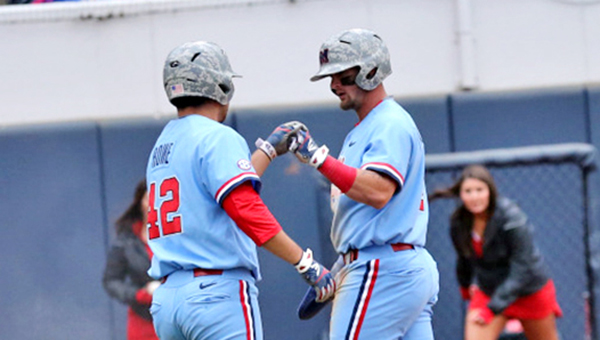 OXFORD — Needing a series win to stay at .500 in the Southeastern Conference race, Ole Miss got one of its best offensive games in league play.

The Rebels made the most of nine hits and seven walks in a 9-6 win over Missouri before 7,208 fans at Swayze Field Sunday afternoon.

All nine Ole Miss runs came in the first four innings, and the Rebels (25-15, 9-9 SEC) survived a Missouri push over the back half of the game. The Tigers threatened but never got the tying run on base.

Sophomore Nick Fortes moved from catcher to first base on Friday. He did not have a hit in the first two games but doubled twice and drove in three runs on Sunday.

His two-run double and a three-run home run by Colby Bortles were the highlights in a five-run fourth inning.
The Rebels had six hits and ended the fourth with a man on when Cooper Johnson grounded into a 5-3 double play.

The conference series win is the third of the season for Ole Miss.

“It was big not only to get our record back to even but also a confidence booster for the team. I think we all needed it at this point,” Fortes said.

Ole Miss left-hander David Parkinson was pushed back in the rotation because of a stomach virus. He worked behind in counts often but allowed just one run through four innings.

He couldn’t finish the fifth and allowed four hits and three runs in the inning. Freshman Houston Roth got the win in relief, but Ole Miss coach Mike Bianco liked what he saw in Parkinson’s competitive nature.

“He said he felt good, but to be honest it’s hard to imagine that. He’ll never admit it, but I don’t think he was right today health-wise,” Bianco said.

There was offense before the fourth, thanks in large part to opportunities provided by Missouri right-hander Bryce Montes De Oca, who walked five in his 2 1/3 innings.

In a three-run first Ole Miss got a sacrifice fly from Will Golsan, the first RBI double from Fortes and a third run when Tim Rowe scored on a wild pitch.

Missouri scored two runs on four hits against Roth, who pitched three innings. Will Ethridge was perfect for the last 1 1/3 innings for his first save.

“We’re past the halfway point. It’s kind of getting make-or-break now. It’s good to get a big series win to help us go forward,” Fortes said.