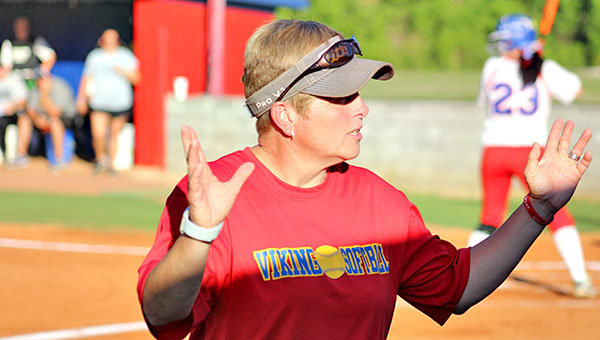 Warren Central softball coach Dana McGivney talks to her team during Game 1 of a softball playoff series Tuesday against Hernando. On Thursday, the Lady Vikes lost Game 2 6-0 and were swept in the series. (File/The Vicksburg Post)

When the dust settled on their latest playoff series and their season Thursday night, it wasn’t hard to dissect the reasons why the Warren Central Lady Vikes were heading home on the wrong side of things.

Hilderbrand threw a one-hit shutout — and also drove in two runs with a solo home run and a squeeze bunt — to lead Hernando to a 6-0 victory in Game 2 of its Class 6A softball playoff series against Warren Central.
Hilderbrand allowed a total of five hits and two runs in the Tigers’ two-game sweep.

“We played solid defense but didn’t hit,” Warren Central coach Dana McGivney said. “I wasn’t overly impressed by (Hilderbrand), but she held us to five hits in two games so I guess she was doing something right.”

Hernando (21-7) advanced to face Madison Central in the Class 6A quarterfinals next week. It’s a rematch of a 2016 second-round series that Hernando won in three games.

Warren Central (12-16), meanwhile, made the long drive home with a mixed bag of a season. It lost five of its last seven games and still has never made it past the second round of the playoffs.

On the positive side, the Lady Vikes rallied to beat Olive Branch in the first round after losing Game 1, had Hernando on the ropes until late in Game 1 of their second-round series, and battled through a rash of late-season injuries to remain competitive in a tough situation.

McGivney seemed focused on the positive far more than the negative.

“I’m proud of the girls for playing through the ups and downs of the season, dealing with all the injuries and illness, and making it as far as we did,” McGivney said.

Warren Central held a 2-0 lead through five innings of Game 1 against Hernando, and then never scored or held the lead again. The Tigers scored six runs in the last two innings to take Game 1 and then took the lead in the bottom of the first inning in Game 2. Vivian Stringfellow hit a one-out triple and scored on Hildebrand’s squeeze bunt for a 1-0 lead.

The Tigers added three runs in the fourth inning, and then Hildebrand homered in the fifth to make it 5-0. An RBI single by Alexis Sandifer finished the scoring.

With only six golfers and two teams in the mix, the Region 3, Class III girls golf tournament was really... read more