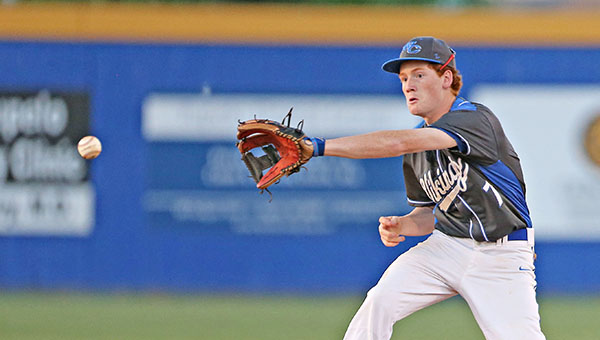 Warren Central second baseman Grayson Shealy waits for a throw at the bag against Tupelo Thursday night. Tupelo beat WC, 5-0, in Game 1 of their Class 6A playoff series. Game 2 is Friday at 7 p.m. at Warren Central. (Adam Robison/Tupelo Daily Journal)

Warren Central hit some balls hard. They hit some soft. They hit some right at defenders and even a couple to the warning track. Where they didn’t hit them was where they counted.

Tupelo’s Jackson Bridges threw a no-hitter against the Vikings on Thursday night, leading the Golden Wave to a 5-0 victory in Game 1 of their second-round Class 6A baseball playoff series.

Bridges walked two batters, hit one and struck out five. It was the first no-hitter of his high school career, and his second shutout in three starts. Including a four-inning stint of scoreless relief in his previous outing against Hernando, Bridges has allowed three earned runs in his last 25 innings.

“We hit some balls hard right at them. They caught some balls at the track. It just was not our night,” Warren Central coach Conner Douglas said. “It’s baseball. That’s the way it goes sometimes. They had some things really go their way offensively. They caught the breaks tonight. That’s part of it, too.”

Tupelo (19-8) can finish the series in Game 2 Friday at 7 p.m. at Warren Central. If a Game 3 is necessary, it will be played either Saturday or Monday at Tupelo. The exact time and date for Game 3 has not yet been set.

Douglas said some of the Vikings’ close calls in Game 1 will make it easier to shake off the loss and make a comeback in the series.

“In a sense, we know a foot this way or that way and it’s probably a different ballgame. The first inning, a bunt and a swinging bunt got things going the right way for them. It was bad luck for us,” Douglas said. “We are ready to toe it up tomorrow. Our backs are against the wall, but we like our guys.”

Despite not getting a hit, the Vikings (17-15) did have plenty of opportunities to score early in the game. They had runners on base in each of the first four innings thanks to the two walks, two errors and a hit batter.
None of them got past second base.

Vantrel Reed was picked off second to end the first inning. Tyler McRight grounded out to end the second with a runner on. A leadoff walk went for naught in the third, and two runners were stranded in the fourth.

After that, Bridges was on easy street. He retired the last 10 batters he faced and finished off the no-hitter by getting McRight to ground out to third for the final out.

“It was big,” Douglas said of the missed opportunities early in the game. “We didn’t get that timely hit, and that’s been our nemesis all year. A hit in those spots changes the complexity of the entire game. But we are going to break that funk tomorrow.”

Tupelo, meanwhile, did get the timely hits. Three straight singles — one of them a bunt and the other a swinging bunt — started things off in the bottom of the first inning and opened the door to three runs that gave Bridges plenty of breathing room.

Michael Ray drove in the Golden Wave’s first run with a sacrifice fly, and then Bridges helped his cause with a two-run double that made it 3-0.

Two walks and an error gave Tupelo another run in the second inning, and Bridges added another RBI with a sacrifice fly in the fifth for a 5-0 lead.

Bridges finished just 1-for-2 at the plate, but drove in three of the Golden Wave’s five runs in addition to his superb pitching.

Caleb Sterling started and threw four innings. He allowed four runs, three earned, on five hits and four walks. Morgan Jarabica and Collin Standish pitched one inning of relief apiece, but all of them were outdueled by Bridges.

“I’m proud of our guys for competing and bringing intensity on a tough trip,” Douglas said. “They (Tupelo) have to make it tomorrow and we will be ready to play.”