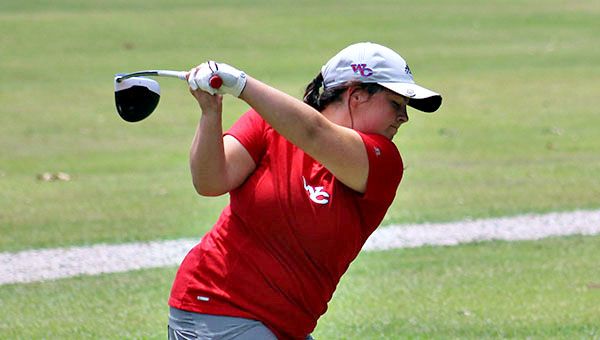 With only six golfers and two teams in the mix, the Region 3, Class III girls golf tournament was really more of a competitive practice round — and a tuneup for Monday’s Class III state tournament on the same course — for everybody involved.

That didn’t mean there weren’t benefits to be gained from it, though.

Warren Central’s Karley Whittington, as expected, earned medalist honors and led the Lady Vikes to the team title by shooting an easy 1-under par 71 on her home course Thursday at Clear Creek. Her teammates also turned in two of their better rounds of the season, with Mia Wamsley shooting a 94 and Sydney Stuart a 100 to give the team a positive bounce heading into the two-day state tournament that begins Monday morning.

“It’s super good going into the state tournament Monday and Tuesday knowing we won this one. I love the score we posted. I’m just so excited,” Whittington said.

Northwest Rankin and Madison Central also had golfers on the course Thursday, but are not in Region 3 and treated the tournament as a competitive practice round and scouting mission. Warren Central and Clinton were the only teams actually in competition on a cool, windy morning, and the Lady Vikes won easily thanks to Whittington.

The junior and two-time state champion was 18 shots ahead of runner-up Carley Havens of Clinton and one of only three golfers to break 100. Clinton’s roster was rounded out by Haley Tatum with a 109 and Remi Nichols with a 116 to give the Lady Arrows a team score of 198.

The top two scores from each team comprise the team score, so Whittington and Stuart gave Warren Central a total of 165. That, more than the championship, was what really excited the Lady Vikes since it’s right around what they figure they’ll need to shoot to compete for their second state title in four years.

“Anything under 170 is going to put us in the hunt,” Warren Central coach Matt Williams said. “To shoot 165 today is very pleasing. All three of them came off the course and said, ‘I could’ve done better,’ which is good to hear.”

That included Whittington, who missed a number of birdie putts and figured she could have shot even better than she did. She’s broken 70 a few times at Clear Creek, including a 66 in the state tournament the last time it was held there in 2015.

Making a few more shots next week could bring both the individual and state championships back to Warren County.

“For the majority, I hit the ball really well. I’m happy with it, but by the state tournament I hope I can turn my putter on and sink some of those putts that I left out there,” Whittington said.

UP NEXT:
• MHSAA Class III state tournament
• May 1-2, at Clear Creek
• The tournament will start at 9 a.m. each day. Clear Creek Golf Course will be closed to the public until all of the golfers have started their rounds, by approximately 11 a.m.