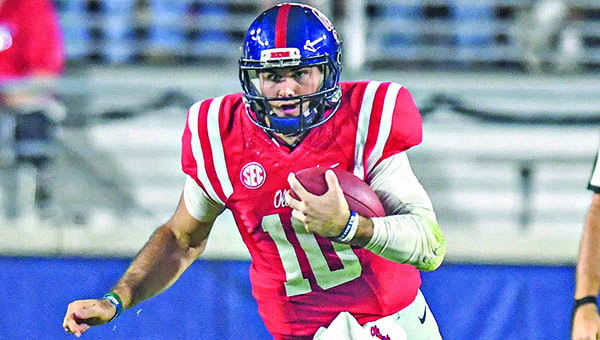 Ole Miss quarterback Chad Kelly was selected by the Denver Broncos with the final pick of the 2017 NFL draft on Saturday. (Bruce Newman/The Oxford Eagle)

PHILADELPHIA (AP) — The final day of the NFL draft began with an impromptu rendition of “Fly Eagles Fly” by former Philadelphia star safety Brian Dawkins and ended with a player who was far from irrelevant in college being picked last.

Ole Miss quarterback Chad Kelly, a talented player with a history of off-the-field issues and injuries, was the 253rd and final selection Saturday by the Denver Broncos.

The final pick gets honored as Mr. Irrelevant, but Kelly was a player who could have been picked in the first three rounds if not for his various problems.

“He was my favorite quarterback in the draft. He beat ‘Bama twice. That’s tough to do as a college quarterback,” Broncos head coach Vance Joseph said. “He’s a tough guy. He’s smart. He’s made some childish mistakes in the past, but he’s learned from those things so I’m comfortable with him.”

Kelly started his college career as a highly rated recruit at Clemson. He was dismissed from the team after being a disciplinary problem and went to junior college before landing at Ole Miss. In two seasons with the Rebels, he passed for 6,800 yards and 50 touchdowns.

Last season was cut short by a torn knee ligament and then in the offseason draft process he suffered a wrist injury.

Seventh-round draft picks coming off of injuries don’t always make the final roster, but Broncos team president John Elway seemed willing to wait for Kelly to get healthy and show what he can do.

“He’s got the thumb, so he’s an August-September guy. We realize it’s going to take him some time to get healthy, so we’re in the process of bringing another arm in until Chad is ready to go,” Elway said.

Mr. Irrelevant is honored during “Irrelevant Week” in Newport Beach, California. The last pick in the draft is feted at a weeklong series of events and parties in southern California at a date to be determined this summer.

It’s the second consecutive year that Mr. Irrelevant has come from a Mississippi college. Southern Miss defensive back Kalan Reed was the last pick in the 2016 NFL draft.

Kelly was one of three Ole Miss players picked in the final two rounds of the draft, bringing the school’s total to four this year.

Defensive tackle D.J. Jones went to the San Francisco 49ers in the sixth round, with the 198th overall pick. Derrick Jones, a defensive back who also played wide receiver and on special teams during his career, went to the New York Jets a few picks later, at No. 204 overall.

Tight end Evan Engram was picked by the New York Giants in the first round on Thursday.

The only other Mississippi player drafted was Mississippi State offensive tackle Justin Senior. He was selected by the Seahawks in the sixth round.