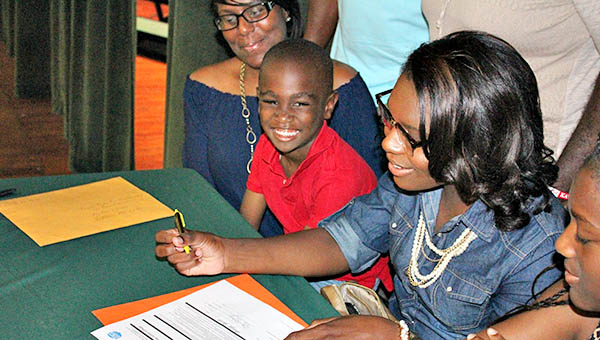 The former meant security and prestige. The latter was a bit of a risk, but also a chance to improve her skills and perhaps a better chance to succeed in the long term.

When she made her final choice, Banks opted to roll the dice.

The Vicksburg High soccer star signed with Jones County Junior College on Friday, taking the two-year route in the hopes it’ll lead to bigger and better things when her time there is up.

“I really sat down and thought about the pros and cons of all the jucos. I really wanted to go to Mississippi State, but I decided to go and get more skills at a juco and get better, and then go to a D-I school after my two years,” Banks said. “I picked Jones because out of all the jucos I really liked everything about Jones.”

Banks heads to Jones with quite a resumé. She won the Vicksburg Post Player of the Year award three times, was a varsity starter for six seasons, and finished second on Vicksburg’s career list for goals scored.

Banks tallied a school single-season record 46 goals in the 2016-17 season to finish with 152 for her career.

Banks had scholarship offers from Mississippi State, Northwestern State, Louisiana-Monroe, Alcorn State, Jackson State and Mississippi Valley State, as well as a number of Mississippi’s junior colleges. She decided not to take one of them right away, passing on national signing day in early February and dragging the process out an extra 2 ½ months.

“This is late. This is really late,” she said. “But I really had to take my time and know for sure that this is where I wanted to go without second-guessing it. I feel like this is where I’m going to feel like I’m at home.”

Jones should provide a good atmosphere for Banks to hone her already strong skills. The Lady Bobcats went 15-2 last season and won the MACJC and Region 23 championships. They had four players sign with four-year schools, including two with Division I programs.

Jones head coach Dolores Deasley is heading into her ninth season with Jones, and the idea of stability in that position also appealed to Banks. Banks had four head coaches in her six seasons at Vicksburg.

“It’s not a lot, but it’s minor foot skills,” Banks said of what she feels she needs to improve on. “I’ve had so many coaches throughout the years. I haven’t had one stable coach that could teach me everything I need to know. So I felt like I needed that for two years and be able to build a relationship with my coach.”

Most of all, Banks said, the decision to go to Jones — and a junior college in general — stemmed from the realization that she still has some things in her game that need tweaking. Going to a smaller junior college, she said, offered her the best opportunity to do that and become a better Division I player in a couple of years.

“I want to be better than what I am, and I don’t think I should go straight into a D-I because I don’t think they’re going to work with me as much as a juco would on my skills,” Banks said. “So I thought it was best for me if I went to a juco first than straight to a D-I. It’s not that I didn’t feel like I was good enough.”