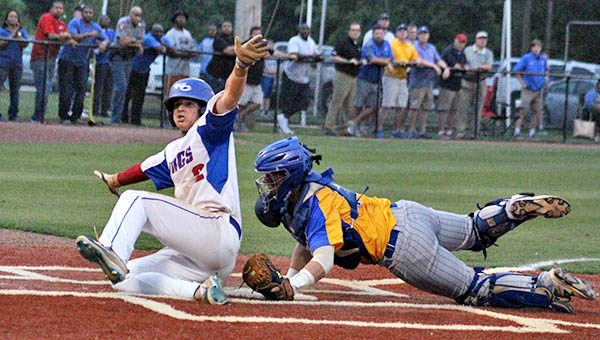 Warren Central’s Hank Holdiness slides across the plate to score a run in Friday’s playoff game against Tupelo. The Vikings were swept in the second-round Class 6A series, but Holdiness is one of eight starters who will return next season. (Ernest Bowker/The Vicksburg Post)

This was a weird season for Warren Central’s baseball program.

With only two seniors in the everyday lineup, it wasn’t supposed to make a lot of noise in the playoffs. It wound up winning a series and maintaining the program’s baseline for success.

Its two pitchers with 90 mph fastballs were expected to come into their own, but never really did. Instead, they found an ace whose fastball tops out around 80 mph on a good day.

The Vikings went 2-7 in games decided by one or two runs, yet still managed to win 17 games — a reflection of a Jekyll & Hyde season where the line between good and great was razor thin.

So, naturally, in the immediate aftermath of Friday’s season-ending playoff loss to Tupelo the assessment of the season was a mixed bag of emotions. There was plenty of optimism for the future standing side by side with disappointment that this season didn’t last a little longer.

“We’ll have a good club. We were very young this year. A lot of guys got experience, a lot of guys got their feet wet. The bumps we took this year from the inexperience, we won’t see that early next year because these guys have been in the fire,” Warren Central coach Conner Douglas said. “And, again, the seniors taught these guys how to play and how to compete. They didn’t quit all night. They’re in the mix and they’ll be ready to start out of the gate next year.”

Warren Central finished 17-15 this season and reached the second round of the playoffs for the fourth time in five seasons. It has only gotten past that round once, however, despite becoming one of a handful of teams that’s generally considered a perennial contender for the North State championship.

The Vikings beat Callaway in the first round of this year’s Class 6A playoffs and then were swept by Tupelo, 5-0 and 3-2, in the second round. The series loss to Tupelo included a number of bad hops and well-hit balls that didn’t fall in, which Douglas tried to be philosophical about after Friday’s defeat.

“You’ve just got to keep trying. 6A is brutal,” Douglas said. The best team doesn’t always win it or advance. I didn’t see us losing to (Tupelo). I think we were a better ballclub one through nine, but they made the plays and they got the hits when it mattered and we didn’t catch those breaks.”

While this season ended in disappointing fashion for the Vikings, it really was just the start of what appears to be an excellent two- or three-year window to make a run at a state championship.

Douglas shuffled his lineup around so often that only a handful of players started every game, but of the eight graduating seniors catcher Tyler McRight and first baseman Matthew Newcomb were the only ones with more than 50 at-bats among the position players. Relief pitcher Morgan Jarabica, who signed with Holmes Community College last week, was the only senior who made more than one appearance on the mound.

Among the returners are pitchers Aaron Greene and Farmer Abendroth, who both struggled to develop into top-end arms this season. Greene battled minor injuries down the stretch and Abendroth struggled with his control.

While those two had their problems, junior Christian Oakes emerged as the team’s best pitcher. He only allowed three earned runs in 37 1/3 innings for a minuscule 0.56 ERA. Two of the runs he allowed were Friday against Tupelo. After he had shut out the Golden Wave for 6 1/3 innings, he left after loading the bases and was charged with two runs surrendered by the bullpen.

If Oakes can maintain his form in 2018, and Greene and Abendroth can return to theirs, the Vikings will have a formidable three-man rotation backed up by several solid arms in the bullpen.

Among the returning position players are shortstop Vantrel Reed (.385, 23 RBIs, 27 runs scored), center fielder D.J. Lewis (.330, 27 RBIs, 31 runs) and first baseman Sean Daily (.349, eight doubles, 16 RBIs).
In all, eight of the 10 starters from Friday’s game — including the designated hitter Daily — will be back in 2018. For as difficult as the end of this season was to swallow, that has the Vikings already salivating for the chance to take a bite at the next one.

“We have a lot more experience on the team now. I think next year we’re going to have a great run,” Oakes said. “Hopefully it won’t end as bad as this one.”