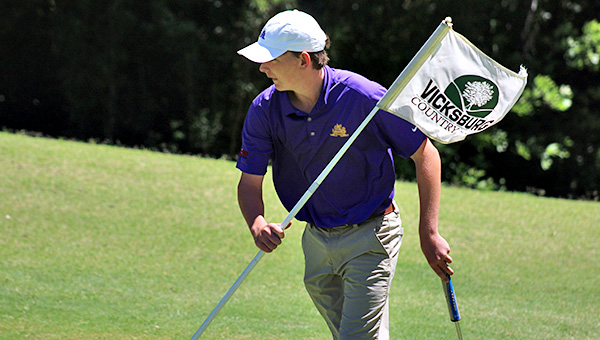 St. Aloysius golfer Wilson Palmertree replaces the flag after finishing the 12th hole Monday at the MAIS Class AAA North State tournament at the Vicksburg Country Club. Palmertree shot an 81 to help the Flashes finish third in the team standings and qualify for next week’s state tournament in Hattiesburg. (Ernest Bowker/The Vicksburg Post)

By the time he hit the seventh tee Monday, it was pretty obvious Channing Curtis was out of the running for medalist honors at the MAIS Class AAA North State golf tournament.

Fortunately, the St. Aloysius star pulled it together in time to salvage his round and the rest of his teammates were there to pick up the slack.

Five of St. Al’s six golfers shot 90 or better on a windy day at the Vicksburg Country Club, making up for an uncharacteristic bad outing by Curtis. Their efforts resulted in a team score of 336, a third-place finish in the team standings, and a berth in next week’s Class AAA state tournament in Hattiesburg.

Wilson Palmertree and Curtis both shot 81s, while Trace Daily shot an 86 and Joshua Larsen an 88. Brandon Teller was at 90 and Joseph Cranfield shot a 97.

“I was 8-over through nine. I was pretty scared. Everybody was telling me the team was doing bad. I was scared we weren’t going to qualify,” Curtis said. “Luckily, the younger guys really stepped up. Joshua and Trace and Wilson all played good today. We would not be going (to state) if they had shot their normal scores. They’re the ones carrying the team today.”

Manchester Academy’s Matt Liddon shot a 69 to earn medalist honors on a day where everyone seemed to struggle. Heritage Academy’s Dalton Ford was second with a 75, and was the only other golfer to break 80.

Heritage Academy beat North Delta in a playoff to win the team title after both finished with scores of 324. St. Al was third at 336 and Central Hinds fourth at 339.

St. Al, meanwhile, will take the whole team thanks to the efforts of its junior members. The eighth-grader Palmertree was one of five players tied at 81 — six others shot 80 to tie for third after Liddon and Ford — while Daily and Larsen each turned in one of their better rounds of the season.

“To me, today was kind of a mediocre day. I missed some putts, but I did hit a lot of good shots,” said Palmertree, whose successes included a 30-foot birdie putt on the sixth hole. “The other guys did all right. They did enough to qualify for state. I think we need to step it up just a little bit if we want to win state this year.”

That made up for Curtis, who didn’t pull out of his nosedive until the back nine. He had three double bogeys and three bogeys on the first six holes before breaking the string with a par on No. 7. His only birdie came on the par-4 16th hole and helped him to a birdie-par-par finish that salvaged the round.

“I was so happy. I was ready to get down on the ground and start praying. It was rough,” said Curtis, who shot a 75 and won in a playoff at a tournament at VCC two weeks ago.

The combination of a tough VCC course, windy and damp conditions, and some nerves all contributed to the field’s struggles. Palmertree said that finding a way to muddle through the struggles and live to fight another day was satisfying.

“It feels good to be able to do that, even though I’m not too happy with how I scored. Considering all the conditions, it wasn’t too bad,” Palmertree said.