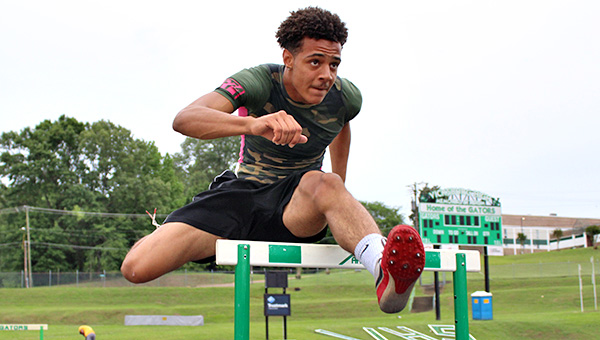 At Vicksburg High, speed isn’t just a goal. It’s a way of life.

Each year since 2011, the school has won at least one championship in the sprint events at the MHSAA state track meet. It won eight last year.

During its half-decade of dominance, Vicksburg High has been home to either the top boys or girls’ sprinter in Mississippi — its athletes have won a state title in the 100 or 200 meters each of the six years. It has also won the girls’ 4×100 meter relay three years in a row.

This year’s Gators and Missy Gators will see some of those streaks end. Their lineup was decimated at last week’s Class 5A North State meet, leaving only a half-dozen entries from each team at Friday’s Class 5A state meet at Pearl High School. The remaining members, however, have no intention of letting the program’s rich tradition slip away without a fight.

“To me, it feels good because it lets me know I’m keeping up the legacy and I’m part of something bigger,” said senior Ramsey Fultz, who will compete in the 110 and 300 meter hurdles, and the 4×100 meter relay. “We don’t talk about it. We just do it. We put in the hard work and it comes out in success.”

Fultz is trying to not only claim his own state championship, but carry on the legacy built by former teammate and mentor Leon Miles.

Miles won the 300 meter championship three consecutive years from 2014-16, and also the 110 meter hurdles title in 2015 and 2016. Fultz was fifth in the 110 hurdles last year and has made a big leap to be a championship contender this time.

Fultz will enter the state meet as the North State champion after posting a time of 14.79 seconds last week at Oxford. Only one other runner qualified with a time under 15 seconds.

“I came in last year behind Leon. He was No. 1 in the state, and this year will be my year. I stayed working hard like Leon told me,” said Fultz, who described Miles as his “older cousin and hurdle coach.”

It’s the 4×100 and 4×200 relays that will have the best chance of upholding the program’s winning tradition. The Missy Gators’ quartet has only lost once this season, when it finished as the runner-up to Class 6A Clinton at a regular-season meet in Oxford in April.

The relay team is three seconds ahead of the next-closest qualifying time in the 4×200, while the 4×100 times are bunched tighter together.

“The first meet we knew it, because we didn’t have a relay team. We didn’t have Mikayla because she was at soccer. We did pretty good and realized we didn’t have anything to worry about,” Patton said. “We’re racing for time. We’re trying to beat a 48 and trying to get it down.”

Vicksburg won the 4×200 state title in 2015, and is the three-time defending champion in the 4×100. Over the past three years, the roster has changed a bit. Banks has been on the relay all four years, but Patton and Gray didn’t move into the lineup until 2016. This is Cain’s first year, after running as an alternate with the group last season.

Cain, Taylor and Patton are all juniors, while Banks is a senior. With three of the four coming back, the Missy Gators are already looking at cementing their legacy in 2018 — and continuing the tradition.

“It’d be a threepeat for the relay team if we win it next year,” Patton said. “We should be able to. We’re only losing one person.”