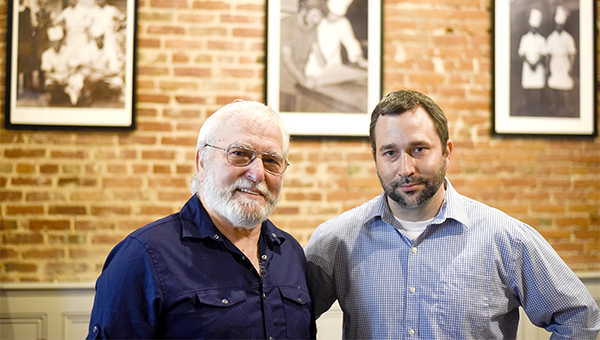 Jacque and Jay Parmegiani pose for a portrait inside the new Rosa Restaurant and Jacques’ bar located on Washington Street. They are currently working on the finishing touches to the new restaurant and bar. An opening date has not been announced.

No one knows better than Jay Parmegiani  about promising a future opening date of a restaurant, and in an effort to keep from repeating history, mums the word as to the official opening of Roca Restaurant & Bar, which is being relocated to Washington Street.

For months, (maybe years) Parmegiani told his patrons the 10South Rooftop Bar & Grill, a restaurant also owned by Parmegiani and partner Tim Cantwell, would be opening in “six to eight weeks.”

However, due to nightmarish delays in the construction process, the restaurant did not open until nearly three years after construction had first begun.

And when the restaurant did open, the wait staff sported t-shirts with the slogan “six to eight weeks” printed on the back.

There will not be any t-shirts this go-round, Parmegiani said, because the only promise the Vicksburg chef is willing to say about the opening date is “soon.”

He said he has been lucky to have a strong staff aiding in the restaurant’s transition, admitting no move is stress-free.

“Relocating or opening a restaurant is no easy task, but I’ve been very fortunate to have our core team that has been with us from day one. They have definitely taken some of the weight off my shoulders,” Parmegiani said.

Although the location has changed, Roca will continue to retain its contemporary Southern cuisine, Parmegiani said.

They will however, not be offering pizzas on the menu due to the fact there is no space in the new facility for a brick oven.

Parmegiani did promise to add some new entrees in the near future.

With maximum seating around 70, Parmegiani said Roca’s new atmosphere would be casual and easy going, which is fitting for downtown dining.

And as well as being excited about the move to Washington Street, Parmegiani said he was also happy his father, would be taking up residence in the upstairs portion of the building.

Jacque Parmegiani was the former chef at Jacques’ located at the old Battlefield Inn on the Frontage Road next to Park residents, and he will be opening a bar by the same name with the same type of environment.

“We wanted to bring the Jacques’ experience to downtown Vicksburg,” Parmegiani said.

“I have fond memories of dads bar, its patrons and the culture. It was always a comfortable place where people had a great time, and we wanted to duplicate that vibe above Roca. And with downtown growing tremendously right now, we wanted Roca and Jacques to be a part of that,” Parmegiani said.

Parmegiani said Jacques’ will offer a limited menu provided by the Roca kitchen, and will feature a full bar.

Since first opening Roca eight years ago, Parmegiani said the community support has been a blessing, and he hopes to continue serving the needs of Vicksburg.

“The ultimate goal is to bring more energy to downtown and get as much focus on downtown as we can. There are lots of great restaurants and bars already here, and we hope to build on that,” Parmegiani said.

Editor’s note: A previous version of this story referred to Jacques’ as a restaurant. It will be a bar with limited food service provide by Roca.