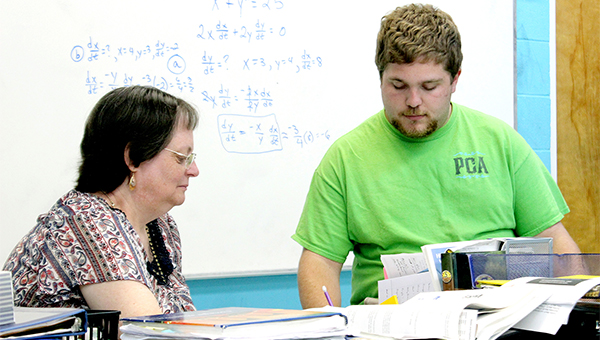 Cody Bryant was named Porter's Chapel’s STAR student for the class of 2017. He chose math teacher Frances Warren as his STAR teacher. Bryant will also be honored as the class valedictorian at graduation on May 18 with a 4.0 GPA.

Recently, Bryant was named the school’s STAR student in the class of 2017 and will be honored as the class valedictorian at graduation on May 18.

“I think it is very important to be able to show that I tried my best in school and have done all that I can. I want to be successful in life,” Bryant said. “[Valedictorian] probably means more than being STAR student. It means you’ve done the best in your class. We have a lot of smart people in the class and to be able to be on top of that class is pretty important to me.”

Bryant received a high score of 32 on the ACT and holds a 97.5 average in his core classes.

“It is a big honor to say that you qualified as one of 284 out of thousands of students in Mississippi,” Bryant said.

The STAR student also chooses a STAR teacher, who has had the greatest impact on their education. The teacher can be from the elementary or secondary level.

“She is a good math teacher and my favorite subject is math,” Bryant said. “I think she has prepared us well for college.”

“He is a very hard worker. He is very dependable,” Warren said. “He is not one that gives up easy. If he can’t figure something out, he is going to work at it. He isn’t just going to give up and say I can’t.

“He has matured a lot in being able to answer questions and work with his classmates. He is more outgoing with that now.”

During his time at Porter’s Chapel, Bryant has served as manager for the football team, the bookkeeper for the basketball team and was a member of the golf team. He is also currently the president of the Key Club, Student Council and the senior class.

After school, he works as a student trainee at the Coastal Hydraulics Lab.

After graduation, Bryant plans to pursue a degree in civil engineering at Mississippi State University.

“I enjoy math and engineering and thought that would be the best fit for me,” Bryant said. “It is the most affordable engineering school and the best one around.”