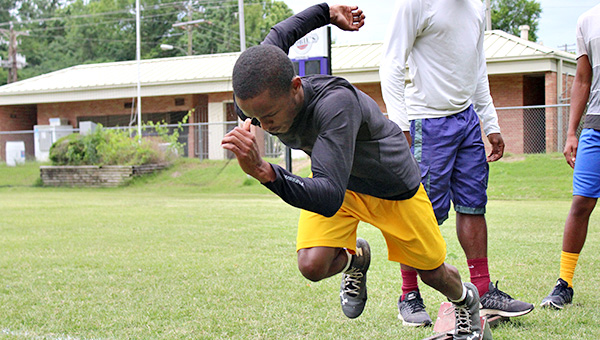 St. Aloysius sprinter Donald Woodson breaks out of the starting block during practice on Wednesday. Woodson will compete in six events — the 100 and 200 meter dashes, the 300 meter hurdles, and the 4x100, 4x200 and 4x400 meter relays — at the MAIS Class AAA state meet this weekend. (Ernest Bowker/The Vicksburg Post)

In the comic books, the Flash is a superhero who can run fast enough to bend time.

In the real world, the Flash known as Donald Woodson isn’t quite that fast but could certainly find that super power handy this weekend.

It’s a busy schedule, but one Woodson said he’s more than ready to take on — and conquer.

“I think about it, but during a race I don’t. I’ve been practicing way too long and way too hard for it to get to me,” Woodson said of the fatigue from his full day. “I feel like I’ve got a good chance in all six, honestly. I don’t think anybody in Mississippi works as hard as we do.”

St. Al’s boys team is eyeing its second team state title in three years — it won the 2015 Class 1A title while still a member of the Mississippi High School Activities Association — and can get a leg up with Friday’s field events.

Junior Jaylen Whitaker is a heavy favorite to win the shot put title, while Antonio Thompson and Preston McGowan can provide valuable points in the discus and long jump, respectively.

Saturday’s running events figure to be the Donald Woodson show. He was victorious in all six of his events at the North State meet. His time of 41.64 seconds in the 300 hurdles is nearly two seconds ahead of the next-closest seed time, and he’s several tenths better than anyone in the 100 or 200 meters. His closest competition might be teammate Jamar Williams, who lost by two-tenths of a second last week in the 200 and a tenth of a second in the 100.

Williams will also compete in the 400 meters Saturday.

Woodson’s time last week in the 100 was a wind-aided 10.60 seconds. His best time without a tail wind was 10.81. Former St. Al star DeMichael Harris set the overall MAIS record last year with a 10.55 at the state meet.

Woodson wasn’t sure if he could challenge that mark, but certainly hoped so.

Woodson and Whitaker will try to duplicate the feats last year of Harris and Josh Price. Harris also won the sprint titles — replacing the 400 for Woodson’s hurdles — and Price won the shot put title. Whitaker was fourth in the shot put in 2016.

Both of the current Flashes said they learned from their predecessors and are trying to follow in their footsteps, not just for themselves but to help build St. Al’s track and field tradition.

“Josh helped me. He taught me my main technique to get to the stage I am now,” Whitaker said. “We’re trying to build a winning track program. Two years ago they won state, and we’re trying to get back to that level.”

The Flashes certainly have a chance this weekend. With 17 entries in the state meet, they are expected to contend for the team title with Silliman and Centreville Academy.

Centreville also has 17 entries in the meet, while Silliman has 22. Depth and numbers often win the day in track and field’s team competitions, where every point matters, but St. Al coach Michael Fields said his team’s quality and depth might be enough to gain some separation from the pack.

“It’s going to come down to a three-team battle. We and Centreville have 17 chances to score points, and Silliman has 22 but doesn’t have the depth we have,” Fields said. “If everybody runs to their potential, we have a chance to come out the victor.”

Even though a team title would be the first for the Flashes as a member of the MAIS, Fields said it could also be the birth of a dynasty. Several freshmen and sophomores reached North State before missing the cut, and several others have been injured.

Versatile junior sprinter Connor Bottin, for example, suffered a knee injury during soccer season and has been out for all of track season. Bottin won the Class AAA championship in both the 110 and 300 meter hurdles in 2016, and was also a member of several sprint relay teams.

A freshman, Brayden Roesch, cleared 10 feet in the pole vault at North State but lost a tiebreaker and did not advance to the state meet.

Those athletes, plus a few others, will keep the Flashes in the championship hunt beyond this year, Fields said.

“That’s the key to having a winning program, where you have guys that can step in when others are gone,” Fields said. “Next year we have some hidden gems that are going to step in.”