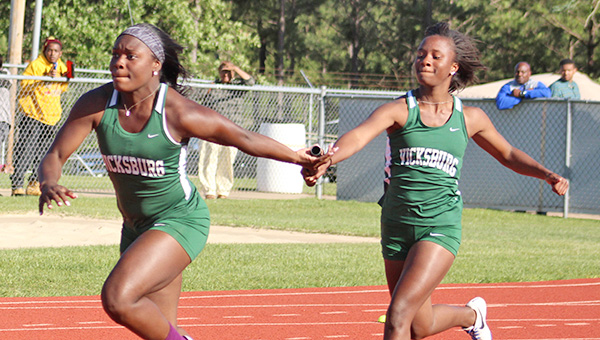 Vicksburg High’s Mikayla Banks, left, takes the baton from Taylor Gray during the 4x100 meter relay at the MHSAA Class 5A state track meet on Friday. Vicksburg won with a time of 49.65 seconds for its fourth consecutive state championship in the event. (Ernest Bowker/The Vicksburg Post)

PEARL — When they were upset on the their first trip around the track Friday, the Vicksburg Missy Gators’ sprint relay team didn’t dwell on the negative. They simply regrouped and did what they do best.

The quartet of Shadia Cain, Taylor Gray, Mikayla Banks and Kiona Patton ripped off a time of 49.65 seconds in their second race, the 4×100 meter relay, to give Vicksburg its fourth straight Class 5A championship in the event.

The same four sprinters finished second to Laurel in the 4×200 meter relay earlier in the Class 5A state meet at Pearl High School.

“Since we got second in the 4×2 all of us were down, so we came together and said there was no sense being down for that race when we’ve got another race to run. We prayed and everything and our confidence went up,” Patton said.

Banks, the only senior among the group, has been a part of all four state championships. Friday’s time wasn’t their fastest — the 2015 group of Banks, Keiyana Gaskin, Destiny Allen and Tymesha Nabors holds the Class 5A record of 47.91 seconds — but it was enough to get the job done and send Banks out a winner.

“It’s never been a relay group that came in and not worked hard. We just continued to work hard throughout the year and tried to come in first at every event that we ran,” Banks said. “It’s amazing. Honestly, it’s amazing.”

The relay team wasn’t the only VHS athlete to keep a winning streak going. Ramsey Fultz swept the boys’ 110 and 300 meter hurdles titles, giving the Gators the state championships in both events for a third consecutive year.

“I’m blessed and thankful to God. And I thank my coaches and Leon. They did a lot of it. Leon’s a mentor. A big cousin, big brother, he pushed me hard,” said Fultz, a senior. “It’s the finish I always dreamed of.”

Fultz entered the state meet as the favorite in the 110 and did not disappoint, posting a time of 14.95 seconds to beat Ridgeland’s Adam Waits by a half-second.

The longer race is not Fultz’s best, but he turned in a personal-best time of 40.99 seconds and beat Germantown’s Levi Harris by several steps. Harris finished in 41.22 seconds, and Keirsten Paige of Hattiesburg was third in 41.77 seconds.

“I told everybody I was saving it for state. Sure enough, it came off,” Fultz said. “It feels good. It feels good to me, it feels good to my coaches. My coaches weren’t expecting me to do it, either. Coach (Clarence) Maxey said, ‘Boy, you’re a wonder.’ That feels good, coming from him.”

The medals won by Fultz and the relay teams were the only ones Vicksburg’s athletes won.
In the girls’ meet, Char’Davia Anderson was fourth in the 110 meter hurdles, Jordan Davis was seventh in the 300 hurdles, and Jamiracle Williams sixth in the 400 meter dash. The 4×400 meter relay team of Williams, Anderson, Cain and Brashayla Thomas finished sixth.

For the boys, Deshawn Calvin finished seventh in the 100 meter dash and the 4×100 meter relay team of Calvin, Fultz, Nick Barnes and Jamaal Jefferson came in fifth.