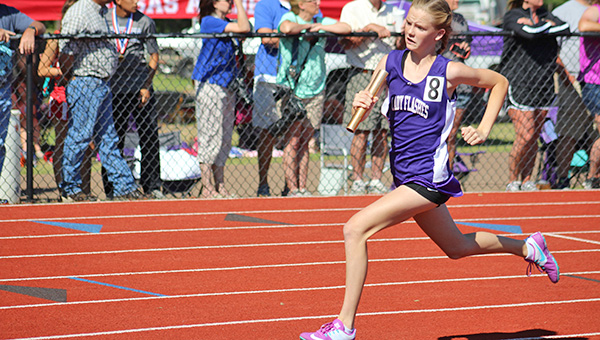 FLOWOOD — With a thin roster, St. Aloysius’ girls’ track team was never a serious threat to join its boys squad as Class AAA team champions Saturday at the state meet at Jackson Prep.

They sure tried, though.

Dede Apenyo won the Class AAA championship in the 400 meter dash, and the Lady Flashes medaled in seven of the eight events in which they were entered to finish third in the team standings.

Distance runner Madelyn Polk picked up three silver medals in the 800, 1600 and 3200 meter runs, and Natalie Burke won a bronze in the triple jump on Friday when the field events were contested.

The only event the Lady Flashes didn’t medal in was the meet-closing 4×400 meter relay. The team of Burke, Mary Ranager, Ann Elizabeth Farthing and Cati Mathews finished fifth, with a time of 4 minutes, 27.50 seconds. Bayou Academy won the race in 4:17.92 to propel it past St. Al in the final team standings.

In the Class AA girls’ meet, Tallulah Academy finished 12th in the team standings with 11 points.
Alana Florice finished second in the high jump for the team’s best finish.

Porters Chapel Academy’s Shelby Barwick finished seventh in the long jump and eighth in the 200 meters.

Vikings have rough time at 6A meet