Vikings have rough time at 6A meet 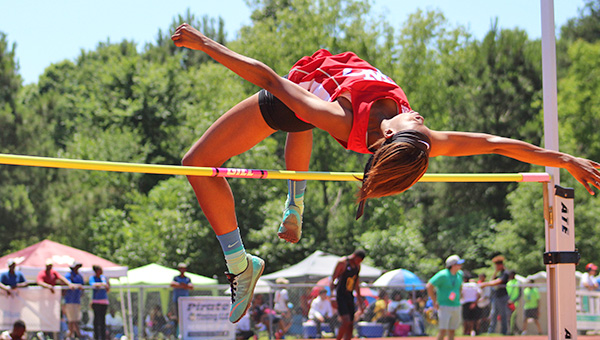 PEARL — Raven Thompson breezed through the first couple of rounds of the high jump competition at Saturday’s MHSAA Class 6A state meet. While some of her opponents needed several attempts to clear the heights, the Warren Central junior sprinted to the bar and soared over it without a hitch.

Then came the 5-foot-4 barrier.

Thompson brushed the bar and knocked it off the standard on her first attempt. On the second, she caught it with her legs. On the third and final try she had more solid contact, knocked it onto the landing mat, and grimaced as her chances at a medal fell with it.

Thompson wound up fourth, not a terrible showing but not the finish she was hoping for at all.

“That ended the threepeat series,” said Thompson, who won bronze medals in the 4×100 meter relay in 2015 and the high jump last year, and was eyeing another medal this year. “It’s a good experience. Everybody doesn’t make it here, so that’s even better when you do make it. Exposure is always good.”

Thompson didn’t miss on her first four jumps, but said the first miss at 5-4 — her personal best height — got into her head and led to the next two.

Thompson’s performance was emblematic of Warren Central’s as a team. Several Vikings entered the meet with realistic chances to medal, but none did.

Watts won the North State championship last week with a personal-best throw of 33 feet, 2 inches, but her best on Saturday was only 31 feet, 10 ¼ inches. Brandon’s Rozetta Howard won the shot put with a throw of 37 feet, 1 ¼ inch.

“It was a tough loss, because I expected more. Just got to get better with time,” Watts said. “I was confident at first. I picked myself up and was going to try to get to 35. The first throw I had was 31, and after that it went down.”