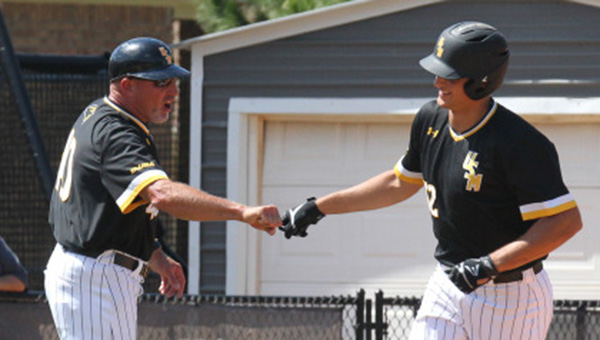 Burdeaux’s two-run single to left field capped a three-run rally in the bottom of the 11th inning as the Golden Eagles pulled off a second straight stunner by topping Florida Atlantic 5-4.

Southern Miss had gotten a walk-off win in Saturday’s game, and then another Sunday. In the latter, Florida Atlantic scored two runs in the top of the ninth inning to tie it and two more in the 11th to take the lead before Southern Miss scored three of its own to win it. It was USM’s sixth walk-off win of the season.

“We wanted all three because it can come back and bite you later in the season,” USM pitcher Taylor Braley said. “It’s like we talk about, and Coach Berry does, if we’ve won the first two games (of a series): ‘We’ve had a good weekend; let’s have a great weekend.’ So, that’s what we try to do every time.”

This time, it took the Golden Eagles’ fifth and sixth walk-offs of the season to do so.

Sunday, the Golden Eagles took a 2-0 lead into the ninth inning after scoring on LeeMarcus Boyd’s single in the fourth inning and Matt Wallner’s 15th homer of the season leading off the eighth.

Braley had a two-hit shutout going into the ninth before Jared Shouppe hit his fifth home run of the season with one out and David Miranda swatted his 11th of the year with two outs to tie the game.

The Owls took a 4-2 lead in the top of the 11th inning on Stephen Kerr’s sacrifice fly and Jordan Poore’s double. But with runners at second and third and two outs, USM reliever Nick Sandlin (8-1) got Pedro Pages to ground out to end the inning.

Southern Miss’ winning rally started with two outs in the bottom of the 11th, after Cole Donaldson and Hunter Slater each drew walks to put runners at first and second.

Boyd, who has two game-winning walk-off hits this season, got behind 0-2 in the count before stepping out of the box to take a deep breath.

“I didn’t want to get out of my zone,” Boyd said. “I had to step out, get back my composure, then step back in and look for a pitch that I could drive in the outfield.”

Boyd did just that, rifling his 16th double of the season into left field to score Donaldson and send Slater to third base.

That brought up Burdeaux, who said he and Boyd had a brief conversation before the latter’s at-bat.

“He told me before that at-bat, “I’m going to get to second, so just hit me in,’” Burdeaux said.

Burdeaux did, snapping a curveball past a diving Austin Langham at third base and into left field. Slater and Boyd scored easily to set off a celebration that wound up beneath the scoreboard in left-center field.

“We’re identifying ourselves that we’re a special club,” Berry said, “and we’re special because we never quit.”
Southern Miss is off to one of the best starts in program history, a game better than the only Golden Eagles to host an NCAA Regional, the 2003 team, and tying the start by the 2011 team.

“This team is special,” Braley said. “Kirk (McCarty, pitcher) was just talking about that. He said all we ever hear about is the 2009 team and how good they were. But you need to start thinking about 2017 and about us going forward. If you don’t believe it now, if you can’t believe it after what we’ve done the past two days, then I don’t know (what else we can do).”

BATON ROUGE, La. — Right when it matters most, LSU seems to finally be heating up. Antoine Duplantis lined an... read more