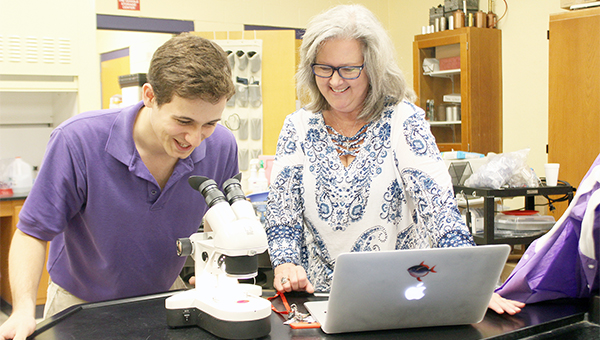 St. Aloysius senior Charlie Martin was named the school’s STAR student for the class of 2017. He chose biology teacher Dawn Meeks as his STAR Teacher.

St. Aloysius High School senior Charlie Martin has been named the STAR student for the class of 2017.

He was honored as one of Mississippi’s 284 STAR students at a banquet on April 27 in Jackson.

“It made me feel proud and glad that I could represent my school by doing this well on the ACT,” Martin said.

“The hardest part was going into the test and just sitting down and pretty much blocking out the world and just working on the test,” Martin said.

During his time at St. Al, Martin was a member of the swim team, Quiz Bowl team, Math and Science team and the citywide Siege Robotics Club.

“I was happy that I got it because it meant that I could choose Mrs. Meeks as my STAR teacher,” he said. “I really like her and she is a really good teacher.”

Meeks taught Martin in biology his freshman year and AP Biology and Anatomy his junior year.

“Charlie is one of the most conscientious and inquisitive students I’ve ever had,” Meeks said. “He is a joy to teach. His level of motivation for learning new things is over the top. He is probably in the top 1 percent of all students I’ve taught and I’ve been teaching for 35 years. He is good at everything.”

Martin plans to attend Purdue University in Indiana after graduation to pursue a degree in biomedical engineering. He will be the fifth generation of his family to attend Purdue.

“The biggest impact that she’s [Meeks] had is that she’s helped me to decide on what major I wanted to do,” Martin said. “I always wanted to do engineering, but I went through biology, AP biology and anatomy and I realized I really like biology. Not really the gross stuff, but I like how the body works and how we can use that.”