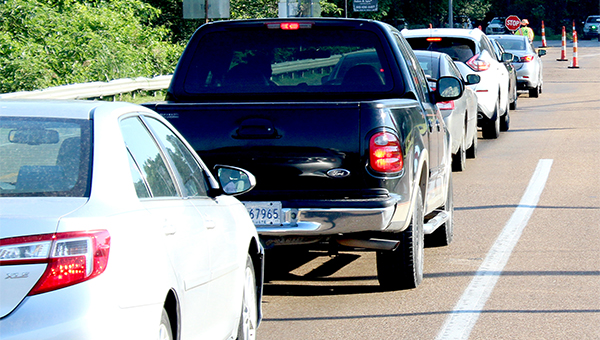 CONGESTION: A mile long stretch of Halls Ferry Road was reduced to one lane beginning Monday just past Monument Place for paving work. The work is part of a widespread paving project in the South Ward.

Traffic on Halls Ferry Road from its intersection with North Frontage Road north to Bowmar Avenue is expected to be one-way for at least two days.

South Ward Alderman Willis Thompson said construction workers were removing and replacing concrete panels in the street as part of the South Ward paving program to improve Halls Ferry and several other streets in the South Ward. The work began Monday.

Halls Ferry Road is one of six streets to be paved under the second phase of the city’s street paving project in the South Ward, which will cost more than $1.4 million. Other streets include YMCA Place, Dos Casas Lane, Capri Drive, Enchanted Drive and a section of Moonmist Drive.

The work is funded through the city’s $9.2 million capital improvements bond issue, which was approved in 2015.

Under the project, sections of concrete paving will be removed, the roadbeds reworked and filled and repaved with asphalt. Any problems with water and sewer lines or storm drains will be repaired before a street is overlaid. Curbing will also be handled during the project.