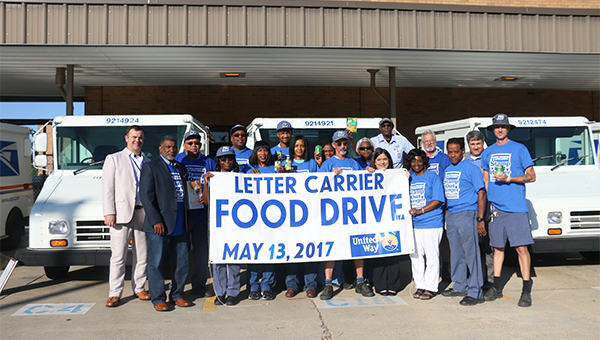 FOOD DRIVE: Letter carriers, who are members of the Vicksburg Local Branch 94 of the National Association of Letter Carriers, announce their upcoming food drive outside the post office on Pemberton Boulevard. Saturday, May 13, marks National Association of Letter Carriers Stamp out Hunger Food Drive, and local carriers will be collecting canned food and non-perishable items.

A walk to the mailbox with a handful of canned goods is all it takes to help feed the hungry.

Saturday, May 13 is designated as the National Association of Letter Carriers Stamp out Hunger Food Drive, and postal workers from across the country will be collecting canned goods and nonperishable items that will go directly to food pantries.

The year will mark the 25th anniversary of the food drive and Vicksburg’s Local Branch 94 of the NALC has partnered with United Way of West Central Mississippi and Eddie and Amy Vaugh Melton to collect food items from Vicksburg and the surrounding Warren County areas.

“The letter carriers of Vicksburg will be doing the food drive in honor of Kimmy Melton, who is the daughter of Eddie and Amy Melton,” Atlas said.

Kimmy Melton, who was a student at Warren Central High School, had been passionate about helping others and had decided she wanted her friends to bring canned goods to her birthday parties in lieu of gifts.

After her death in 2012, Melton’s parents decided to honor her memory with a canned food drive and for the past five years the couple have partnered with local postal carriers.

“The need for food donations is great. Currently, 49 million Americans — one in six— are unsure where their next meal is coming from,” Atlas said, and 13 million of those are children.

Also, of that number, more than 5 million are seniors over the age of 60, many of whom live on fixed incomes and are often too embarrassed to ask for help.

Because food banks and pantries often receive the majority of their donations during the holiday season, it is crucial to give during the other times of the year.

“Many pantries are depleted, entering the summer low on supplies at a time when many school breakfast and lunch program are not available to children in need,” Atlas said.

For those interested in leaving a donation, Atlas said just leave a non-perishable food donation by your mailbox and the carrier will do the rest.

Over the course of the 24-year history of the National Association of Letter Carriers Stamp out Hunger Food Drive, 1.5 billion pounds of food has been collected and dispersed to those in need living in the U.S., Puerto Rico, Guam and the U.S. Virgin Islands.

To honor Vicksburg’s Local Branch 94 of the NALC, the Mississippi House of Representatives passed House Resolution 109, which commends the local group on their 25 years of service to the community.

Mississippi House of Representatives Oscar Dent presented the plaque to the carriers earlier this week.