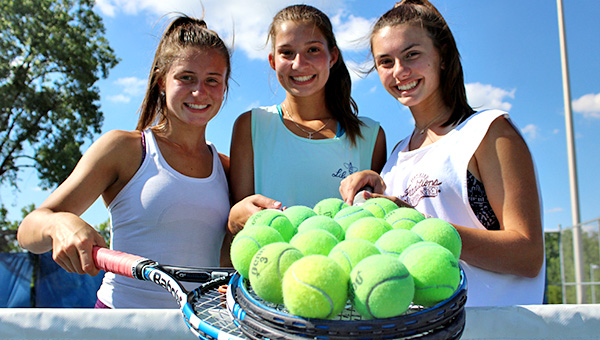 One year ago this week, Ashley Jarratt and Taylor Chewning were one point away from winning a state title in doubles tennis.

Three match points and a set later, they watched another team lift the trophy they were so close to. It was the kind of loss that haunts people for months, years even.

“It affected us for, like, a week or so,” Chewning said. “People said you’re in seventh grade. You’re going to have so many more chances to win one.”

So here they are, 363 days later, ready to dojust that. The St. Aloysius eighth-graders have a 13-1 record this season — and are 28-2 over the past two years — heading into the MAIS Class AAA state tournament Wednesday on their home courts at Halls Ferry Park.

The duo’s laid-back attitude when it comes to competition has been a big part of its success and they’re not about to start taking things too seriously now.

“That was our problem last year. We got really tight. That’s when you mess up,” Jarratt said.

Jarratt and Chewning will begin their quest for the 2017 No. 2 girls’ doubles championship Wednesday at 9 a.m. They’ll take on a team from Laurel Christian in the semifinals, and if they win will face the winner of a match between Manchester Academy and Cathedral in the championship match afterward.

They said the duo from Manchester is the biggest threat. It handed Jarratt and Chewning their one loss this season and gave them trouble in two other matches.

St. Al is hosting the state tournament for the first time, but will only have three players in it. In addition to Jarratt and Chewning, sophomore Elise Piazza will play in the No. 2 girls singles draw.

Piazza is 14-0 this season and was trying to put aside thoughts of a perfect season as she prepares for the last two matches.

“I’m kind of nervous about it, but I’m trying to look at it as just another match so I don’t get nervous about it,” she said. “That does add pressure to it. I was telling my mom the other day, ‘I haven’t lost this season and can’t lose now.’”

This will be the first major high school tournament at Halls Ferry Park since four new courts were added last summer. The MAIS state tournament is here on a one-year deal, but St. Al coach Rick Shields said all indications are it could become a regular event if everything goes well Wednesday.

“It’s the biggest name tournament we’ve had since we added the new courts. Some teams have been here and like the idea of playing here instead of up north or down south somewhere. We’re centrally located,” said Shields, who is also the tennis director for the City of Vicksburg’s Parks and Recreation Department. “It’s a one-year deal, but (MAIS director of activities Les Triplett) suggested we leave it here because of the other locations being crowded. I wouldn’t be surprised if it keeps coming here.”

As a coach whose players are frequently in the mix for state titles, Shields added that he was fine with that from a competitive standpoint as well as a business one. He said playing on their home court will give the Lady Flashes a definite advantage Wednesday.

“Any time you can sleep in your own bed and play on the court you’re used to playing on, that might be worth a couple of games by itself,” Shields said. “If you’re used to a certain background or the way the court plays, it makes a big difference.”