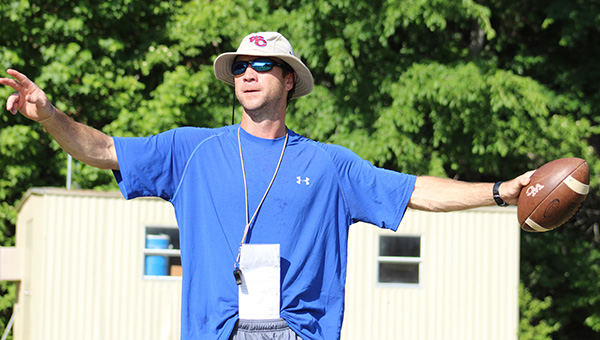 When literally every starting spot is up for grabs on some level, it’s hardly an exaggeration.

Warren Central is replacing 10 starters on offense and nine on defense from the team that went 10-3 in 2016, reached the second round of the Class 6A playoffs, and came within a play of knocking off eventual state champion Clinton. The one returning starter on offense, lineman Braden Moody, is recovering from a torn ACL and has not played this spring.

“You start over,” Morgan said of his approach when breaking in a new starting 22. “We can’t coach them how we left off last year. We have to go back to basics and fundamentals. We have to take them along and ease into it. It truly is like starting over and building from the ground up.”

The spring game Friday at 6 p.m. will be the first in Brandon’s new stadium. It’s the third year in a row the teams have played their spring game against each other.

Although there are a lot of fresh faces in Warren Central’s huddle, there is a bright side for the Vikings. Their system often rotates a number of players in and out of the lineup, particularly on the defensive side of the ball. So, instead of having 11 starters, the actual number of players with equivalent game experience by the end of last season might have been closer to 20.

How they’ve adapted to being full-time starters has been a key part of the evaluation process this spring, Morgan said.

“We’ve got some experienced guys, especially on the defensive side of the ball. So it’s been an important spring for us, and Friday will be a very important audition,” Morgan said. “They’ve been program guys, and we’ve been successful with program guys. We’re playing older boys and not having to play somebody before they’re ready. It’s this group’s turn and our job is to find the best 11.”

Among the backups moving into the starting lineup is quarterback F.J. Barnum. The senior has thrown a total of 21 passes the past two seasons while backing up Jesse Wilson, but like many of his teammates has been preparing for this moment the whole time.

“He’s been with Coach Rob (Morgan, offensive coordinator) the last two years and done everything. He might not have the physical reps, but he’s been in Rob’s pocket the whole time learning,” Josh Morgan said.

How well Barnum and the other Vikings show what they’ve learned will be the major point of emphasis Friday — good and bad.

“It’s really the major evaluation,” Morgan said. “Last year we didn’t have a good showing in the spring game, but we used it and built off it all summer. It’s all good. These guys just need experience and a lot of reps. The biggest thing for them is learning from the mistakes and bumps they take.”

HATTIESBURG — His last chance at an elusive state championship long since gone and his high school career down to... read more