WC duo bows out in Class 6A semifinals 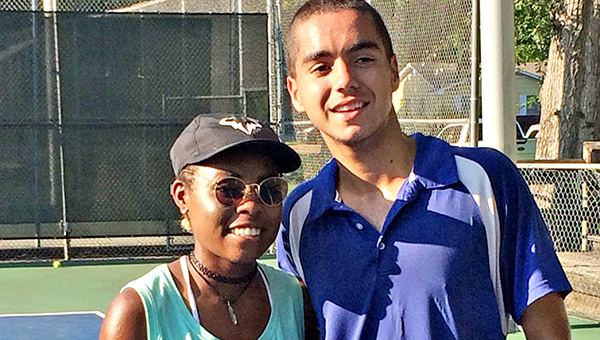 Warren Central tennis players Olivia White, left, and Alex Velazquez advanced to the semifinals of the MHSAA Class 6A mixed doubles tournament before losing to a team from Ocean Springs on Tuesday. (Submitted to The Vicksburg Post)

JACKSON — Alex Velazquez and Olivia White made a stirring underdog run through the mixed doubles bracket of the MHSAA Class 6A individual tennis tournament, but ran out of gas agonizingly close to the finish line.

The Warren Central duo won two matches in two days — including a grueling three-set match in the quarterfinals that lasted 2 hours and 45 minutes — before dropping another three-setter to Ocean Springs’ Anna Hudson and Cole Wagoner in the semifinals Tuesday at Parham Bridges Park in Jackson.

Hudson and Wagoner eliminated Velazquez and White with a 4-6, 6-0, 6-4 victory. That match took place not long after the Warren Central tandem had beaten Gulfport in the marathon match in the quarterfinals.
The championship round is Wednesday at Parham Bridges Park.

“They fought tooth and nail and grinded out every ounce of energy they had, but you could tell they were wore slap out,” Warren Central coach Jeff Pilgrim said. “Just two wonderful senior athletes. They showed unbelievable character today in their quarterfinal match. The team they were playing was emotional and argumentative, and they stayed level-headed and kept their cool.”

The quarterfinal match was against Gulfport’s Elizabeth Switzer and Gordie Verrett, who were seeded third in the 16-team bracket. It was tight the whole way, but Velazquez and White escaped with a 7-5, 6-7, 6-4 victory.
In the first round, Velazquez and White beat St. Martin’s Delynsi Che and Austin McCollom 6-4, 6-1.

Velazquez and White carried the banner for Warren Central after most of its roster was eliminated in the first round on Monday.