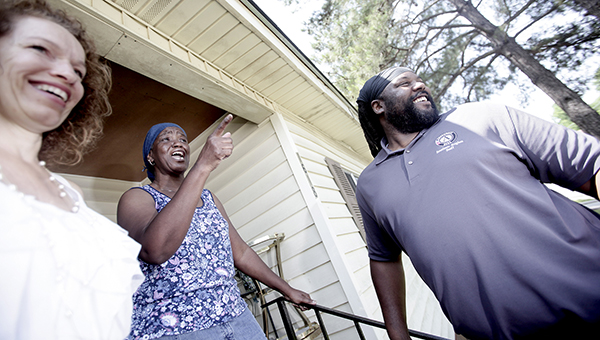 Vicksburg housing director Gertrude Young has her own way to describe the success of Federal Home Loan Bank of Dallas, grants programs in rehabilitating homes in Marcus Bottom, “We’re taking the bottom and we’re raising Marcus Bottom to the top.”

It’s a program that has helped many residents in Marcus Bottom like Erma Humes by providing funds to make necessary repairs to her home on Bowmar Street.

“I really needed the help,” Humes said. “My Sheetrock was coming down in my bedroom, and my living room the wall was bowing out, so it needed to be fixed. When they took Sheetrock down, the ceiling started coming down and they fixed that. My home looks really nice. They painted outside, painted the living room and bedroom, and replaced the water heater.

“I am so grateful for this allowing us to have this. I’ve seen this work I’m so grateful. I’ll tell anybody, if it’s offered, take it.”

Humes told her story to a group of about 20 local and Federal Home Loan Bank officials and residents at a program in Marcus Bottom announcing the award of a $180,000 FHLB grant in cooperation with BancorpSouth to repair more homes in the area.

The program included a tour of homes in Marcus Bottom that were repaired with money from past programs.

“We’re excited and honored to be a part of the program with the city of Vicksburg and the Federal Home Loan Bank so we can help areas that are considered disadvantaged. It’s an opportunity to revitalize parts of our community, and we’re glad we had that chance,” BancorpSouth Vicksburg president Mark Buys said.

She added the Affordable Housing Program helps families continue to live on land that has been passed down from generation to generation.

“There’s a lot of family-owned land that people maintain because it’s been passed down from generation to generation,” she said. “Through the AHP, we’re helping them keep their dream and inheritance.”

U.S. Rep. Benny Thompson, D-Miss., said the program was a good example of public/private partnerships and what they can do.

“The single largest investment the majority of people will ever make is, if they have the opportunity, to own their own home,” he said. He commended city officials for “looking forward down the road, understanding that communities are better when homeowners live in those communities.”

“The good news is today; the bad news is we do this every so often and as often as we can, because the need is so great. Unfortunately I don’t have officials in other areas who are as visionary as your local officials are in Vicksburg.”

“People’s standard of living and quality of life are lifted in Vicksburg through housing,” Mayor George Flaggs said. “That $180,000 will help renovate 25 homes in the community, $35,000 each. It may not look like a lot of money to you, but that’s a lot of money to someone who can’t afford to rehab their house, even if it’s nothing more than just fixing a roof.”

Humes was not the only Marcus Bottom homeowner to tell her story.

Lois Price said her home was in desperate need of repair.

“This is the house I grew up in,” she said as she led a tour around her house on Lane Street. “You know, age makes a house fall down, and that’s exactly what happened.”

Her roof, Price said, was in bad shape and the bannisters for her steps were on the ground. The roof was repaired, her ceilings replaced, she received a new water heater and other repairs.”

“I was just so grateful I was chosen for this program, and I see all the work being done in this neighborhood and I’m just glad I was one of the ones who benefitted from it.”

Theresa Ann Williams’ home on Military Avenue, received a new porch and windows, and the ceilings and floors repaired and her house was painted.

“I was surprised (to be approached) and I was very grateful. I was very thankful and I appreciate everything they did.”

Young said the grant program goes back to former housing directors Beatrice Moore and Leona Stringer, who were able use another Home Loan Bank program, the Special Needs Assistance Program.

“We just happened to be able to do more outside the box, compared what was done prior,” she said. “At this moment, we’re using six different contractors, and we’re going to do 52 houses, including three new builds.”

She said the program has helped the neighborhood, adding the work has inspired other homeowners to clean and improve their property.

“It’s people who are in great need,” Young Said. “Elderly people are the main ones on fixed incomes and do not have the money to do maintenance. It’s great to have people like Federal Home Bank to help, and the people never have to pay the funds back. They just do a deed restriction not to sell the home.”