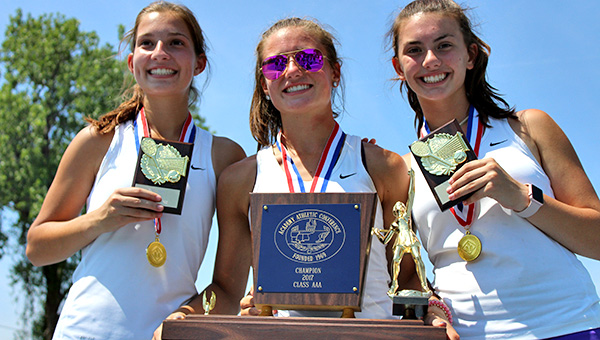 Side by side, on two sun-drenched tennis courts at Halls Ferry Park, Ashley Jarrett, Taylor Chewning and Elise Piazza took turns outdoing one another and drawing loud cheers from a partisan home crowd.

Piazza earned her applause by winning long rallies and steadily marching to victory. The doubles team of Jarratt and Chewning wowed the fans by somehow returning shot after shot, even when it seemed impossible.

When it was all over, it was hard to say which one was more impressive. They were all winners, and they all stood tall as champions.

“It feels awesome. It’s a feeling like no other. It’s something I’ve never felt before. It’s new for me, to be a state champion,” said Piazza, a sophomore. “I was playing my last game and was like, ‘If I win this point right here it’s over. I’m a state champion.’ It really motivated me to push through and do well. You just get chills everywhere.”

Despite only having the two entries in the state tournament, the Lady Flashes emerged with the team title thanks to the unique scoring system used by the Mississippi Association of Independent Schools.

Teams received one point for each match victory by its players. St. Al and Manchester Academy tied with four points each, and the tie was broken by which team won the most individual titles. St. Al’s players beat opponents from Manchester in both tournament finals to give them the team title to go with their individual trophies.

“I’ve known folks who did it with one player. That’s amazing that you can take three girls and win it all,” St. Al coach Rick Shields said. “I figured if everybody played well we’d have a shot to win. If we won both, we were going to knock some of them out we were competing against.”

The Lady Flashes’ trio played better than well. They were nearly flawless.

Piazza beat Brookhaven Academy’s Missy Clanton 6-0, 6-1 in the semifinals and then beat Manchester’s Josie Coker 6-4, 6-1 in the championship round.

The final was marked by several long rallies and, despite being decided in straight sets, Piazza said it was a lot closer than the score indicated.

“Every game we went into deuce, so it was a tough match. Especially out in the heat,” Piazza said. “I’ve beat her every time I’ve played her, but it’s always been a tough match. She’s a really tough opponent.”

While Piazza was dealing with Coker, Jarratt and Chewning were trying to get past Manchester seniors Elizabeth Turner and Mary Sibley McGraw. They occasionally glanced over to the next court, where the singles championship match was being contested, but maintained a sharp focus throughout — a wise move considering their history both in this tournament and with their opponents.

This was the fourth time the two doubles teams have played each other this season. Turner and McGraw handed Jarratt and Chewning their only loss in 16 matches. And, last year, the St. Al duo had a three-game lead and match point in the final but couldn’t close it out.

Neither obstacle tripped them up this time.

Jarratt and Chewning controlled the baseline and expertly returned a number of tough shots from the Manchester pair that seemed destined to be winners. One of Chewning’s shots tipped the net and took a hard left turn, falling in for a winner just on the other side of the net in an indication of which way the match was heading.

“We had a lot of momentum because we knew what was on the line, and we carried it forward,” Chewning said. “We just had to attack at the net. We knew what it felt like to lose and did not want that feeling again.”

Manchester did make things interesting in the second set, winning two consecutive games to pull within 4-3 and bring up bad flashbacks to 2016 for the St. Al team. They didn’t wilt, however, and closed it out by winning the last two games for a 6-4, 6-3 victory.

“Toward the end we had the same thing happen as last year. We got tense. But we got over it,” Jarratt said.

The day of championships put a fitting cap on an outstanding year for all three St. Al players. Piazza finished the season with a perfect 16-0 record, while Jarratt and Chewning went 15-1. The eighth-graders are 30-2 over the last two seasons as a doubles team.

They all seemed as happy for others as they did for themselves.

“I’m really thankful for my coach (Rick Shields) and for coach Allen Hudspeth from the (Vicksburg) Country Club because he’s coached me also. And my family,” Piazza said.

Jarratt and Chewning echoed those thoughts, thanking coaches, teammates and even opponents for their success.

“Probably the team (championship) is bigger, because we won it for our senior Allie (Falls) and the whole team that helped us get here,” Jarratt said. “Credit to Rick Shields and the whole team. And Manchester. They’re nice and honest.”

Greenville-St. Joseph won three of the four boys’ divisions to easily claim the boys’ team championship.
Craig Gardiner and Chris Adams won the No. 1 boys doubles crown, and Brittain Virden and Austin Perkins took the title in No. 2 doubles. Tyler Santucci was the No. 2 boys doubles champion.