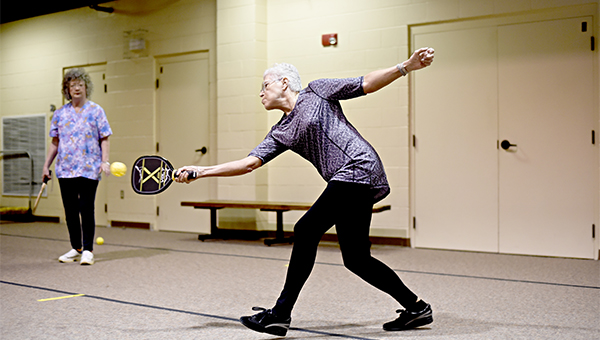 Mary Jane Plett, a member of Hawkins United Methodist Church, plays pickle ball in the Abundant Life Center Friday. Pickleball is a game that combines tennis, badminton and ping-pong and was introduced to the Hawkins United members earlier this year. (Courtland Wells/Vicksburg Post)

The name may sound funny, but pickleball is a game that combines elements of tennis, badminton and ping-pong.

Joel Pritchard, who was a congressman from Washington State and Bill Bell, a successful businessman, created it in 1965. The men, along with their families were all at Pritchard’s home on Bainbridge Island, Wash., and needed something to do to while away their boredom.

Pritchard’s property had an old badminton court on it, but when the men could not locate the equipment for the game, they decided to improvise by using ping-pong paddles and a perforated plastic ball.

The following weekend, Barney McCallum, who was a friend of Pritchard and Bell, came to visit, and he was introduced to the make shift game the men had fashioned.

All three eventually wound up devising rules for pickleball, making sure it was a game that could be played by the whole family.

Earlier this year, members at Hawkins United Methodist Church decided to bring the game to Vicksburg and now at 3 p.m. on Wednesday’s men and women get together to play.

“We have had 12 or so come out to play at one time,” church member Larry Holman said.

Holman along with his wife were instrumental in helping bring the game to the River City.

“About three of four years ago, my wife and I saw the game on T.V.,” Holman said, and shared the experience with church member, Bob Walters.

Holman said conversations ensued for a long time about the notion of pickleball until he was tired of talking and was ready for action.

“We had talked about it and talked about it, how the United Methodist Men could do something with it, so earlier this year, I decided I was going to quit talking,” Holman said.

Therefore, in late January or February, he presented the idea of bringing pickleball to Hawkins during the church’s Wednesday night events.

A decision was made to go forward and equipment was purchased.

“For less than $250 you can have the net and frame, four paddles and half a dozen or so whiffle balls,” Holman said.

Currently the church has three sets, which allows three games to go on simultaneously in its Abundant Life Center.

“The game can be played with singles or doubles,” Walters said, “and has really picked up a lot of interest in communities where they have larger groups of older people. I understand it is real popular on the Gulf Coast, where they even have leagues set up.”

Even though pickleball is a game that can be enjoyed by seniors, Walters said younger folks will also benefit because it does workout all of your muscles.

According to usapa.org, pickleball is one of the fastest growing sports in America with groups located in all 50 states and abroad.