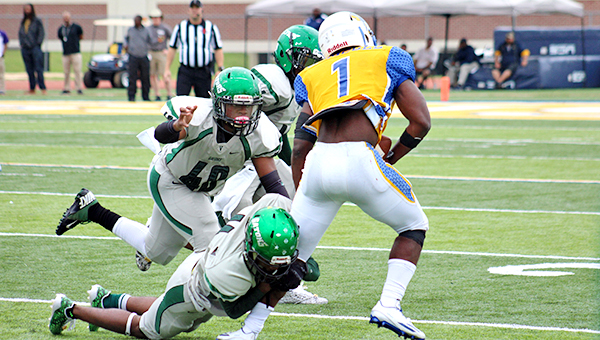 CLINTON — The Vicksburg Gators finished an offseason of turmoil and change by running straight ahead and through the next obstacle in their path.

Quarterback Joe Johnson threw two touchdowns passes and ran for a third score, and the defense carried a shutout into the fourth quarter as the Gators beat St. Martin 21-7 Saturday in their spring game at Mississippi College.

It was an impressive finish to a spring practice period in which the Gators dealt with an unexpected coaching change and the uncertainty about what it might bring as they head into a big season for the program.

The format of the game was a regulation game with a running clock for the first six minutes in the first three quarters, and then for all of the fourth. That limited the number of possessions and stats a bit, but the starters stayed on the field for most of the game and the Gators showed enough on both sides of the ball to look sharp.

The defense sacked St. Martin’s quarterbacks twice and held the Yellowjackets to 94 yards of total offense. Most of those yards came on a 17-play, 70-yard scoring drive that started midway through the third quarter and ended on a 1-yard run by Mileon Graham with 9 minutes left in the fourth.

Jomon O’Neal had both of the Gators’ sacks, and Tyrese Wolfe had an interception on the final play of the game.

“I haven’t hit anybody since November. Talking for the rest of the defense, we were just ready to get out there and hit a different color. We got tired of beating up on each other,” linebacker Nick Anderson said. “I feel like we did good. There’s some things we could work on, but for the most part we did good. We have a lot of seniors flying around. I feel like we’re almost there to hit that peak.”

Offensively, Johnson looked every bit like the senior leader and three-year starter he’s expected to be when the season begins in August.

Johnson completed 11 of 19 passes for 169 yards, with two touchdowns and no interceptions. He also ran six times for 46 yards and a touchdown.

“He made some good reads. He made some good checks. We sat down with Joe and told him that, being a senior, he’s pretty much going to have the green light. We might make the call, but if he sees something out there and can get us in a better situation he has the freedom to check or audible and do what he wants to do with it,” Vicksburg interim head coach Lorenzo Breland said. “He made a few of those checks. He’s seeing it a lot better now. I think he’s hitting it. Late in the game with the pass reads he picked it up and made some good throws down the field.”

The rest of Vicksburg’s skill players combined for eight rushing yards on eight carries. The Gators, however, were without their top two running backs Mike Sims and Jamal Moody because of injuries. The offensive line was also breaking in four new starters.

“We’ve got a young offensive line. The starters that we kept on defense, we lost pretty much our whole offensive line. We’re only returning our center,” Breland said. “So it’s going to be a tough summer and a tough fall getting those guys and bringing them on, but they’re going to be a good group.”

Johnson was sacked twice on the Gators’ opening possession, and they missed a long field goal on the second after a short punt gave them the ball at the St. Martin 34-yard line.

The third possession, however, was the charm.

Johnson converted a third-and-7 by completing a 15-yard pass to De’Angelo Dixon, and two plays later he kept the ball and ran 33 yards to the St. Martin 7-yard line. On the next play, he kept it again and fought through a tackle to get into the end zone for the game’s first score.

In the second half, Johnson used his arm to riddle the Yellowjackets. He dropped a pass just over the safety to Jeff Scott, who took it the distance for a 69-yard touchdown and a 14-0 lead with 5:27 left in the third quarter.

After St. Martin scored at the end of an 8 ½ minute drive, Johnson completed 5 of 7 passes for 51 yards on the Gators’ next possession to put the game away. He got a lot of help on his last completion, as freshman wide receiver Christopher Henderson wrestled a jump ball away from a St. Martin defender in the end zone for a touchdown with 1:30 left in the game.

Henderson finished with three receptions for 32 yards and a touchdown. Scott had three catches for 87 yards and a TD. Johnson spread his 11 completions among six receivers.

“I think we did pretty good on offense,” Johnson said. “There’s still some things to clean up with the young O-Line and receivers, but we’ve got something to build on during the summer and to get ready for Oxford in the fall.”