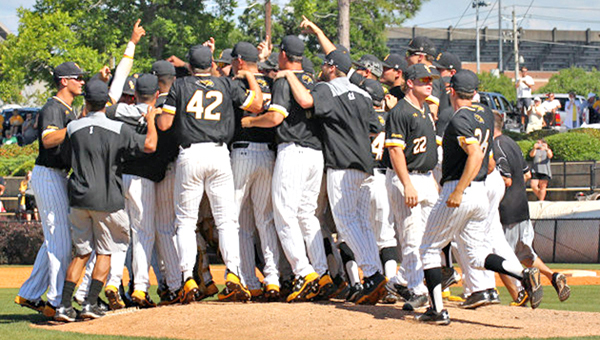 HATTIESBURG — For all of its success over the years in Conference USA, Southern Miss has a surprising lack of trophies to show for it.

The Golden Eagles have won the C-USA Tournament three times, including last year, but the regular season championship only once in the league’s 21-year history.

“That was the first step to our goals, to win the outright season title, and we got that done,” senior first baseman Dylan Burdeaux said. “Now, we move forward. But even though we have the conference title wrapped up, there’s more going forward. That, and you just want to stay hot toward the end of the year and keep playing good baseball. You can’t let up now. You just want to carry that hot streak into the postseason.”

Southern Miss (40-12, 22-5 C-USA) has four games left in the regular season — a midweek game Tuesday in Biloxi against Southeastern Louisiana and a three-game road series at Texas-San Antonio starting Thursday — but have everything within the conference wrapped up.

The Golden Eagles will go into the C-USA Tournament as the No. 1 seed after taking their first regular-season crown since 2003.

They also extended their winning streak to 10 games, reached the 40-win plateau during the regular season for just the third time in program history, and remained on track to potentially host a regional in the NCAA Tournament.

“Just because we won the championship, doesn’t mean we’re going to finish the regular season just lackadaisical,” Braley said. “We’re going to come out and play to win, just like we do every single day and have fun with it. We want to finish strong, playing like we have the whole time.”

The Golden Eagles wrapped up their fifth C-USA series sweep in workmanlike fashion.

Braley (5-2) scattered four hits over seven innings, striking out seven and walking one. The walk, issued to Zack Davis to lead off the eighth inning, was the only one allowed by USM in the series.

Southern Miss took a 2-0 lead in the third, scoring on a throwing error and Hadley’s RBI single.
The Golden Eagles added a run in the fifth inning on Hadley’s two-out single, then took a 4-0 lead on a two-out double by Matt Guidry.

Southern Miss wrapped up the scoring with a four-run eighth inning. Hunter Slater drove in the first run with a triple over the center fielder’s head, two more scored on a fielding error by UAB shortstop Antonio Ralat, and

Hadley capped the rally with a run-scoring double.

UAB (23-29, 8-19), which was eliminated this weekend from the eight-team C-USA Tournament, managed only five hits Sunday. One runner reached third base.

After Nick Sandlin recorded the final out on a grounder to second base, the Golden Eagles gathered near the pitcher’s mound for a somewhat muted celebration before gathering in shallow left field for the normal postgame talk, per usual.

“All we want is rings, now,” Hadley said.

ATHENS, Ga. — After struggling for most of the season, Georgia seems to be getting hot at just the right... read more