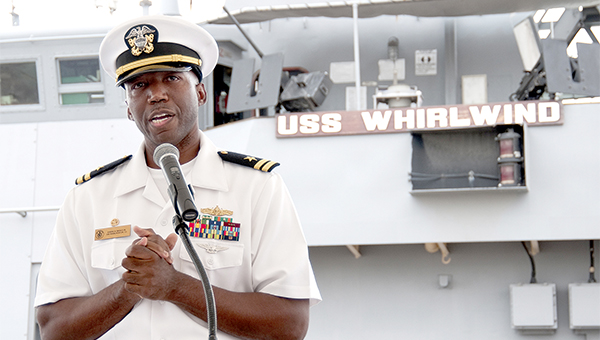 Lt. Joseph Brisco, a Vicksburg native, speaks during a change of command ceremony May 1 in Bahrain. Brisco was named the commanding officer of the USS Whirlwind (PC 11).

“You are out here on the forward edge and your performance has been nothing short of inspiring,” Black said. “There is nothing routine about the work you do; you indeed live up to your motto, ‘Second to None.’”

Dryden assumed command in December 2015. He led the ship in 40 maritime patrols, which included a Griffin Missile shoot and multiple international exercises and theater security cooperation events. Dryden will next be heading to U.S. Navy Officer Training Command Newport in Newport, R.I.

“This is the absolute most challenging afloat tour the Navy has to offer and is located in the world’s most congested and turbulent waterways,” Dryden said. “We have come a long way and I count it among the highest honors of my life to have served with each and every one of the crewmembers.”

“I am blessed for the opportunity to lead America’s finest and to be operating at the tip of the spear,” Brisco said. “As we move forward as a crew, we will maintain optimal readiness to respond to any tasking and meet any mission with excellence.”

Whirlwind is one of 10 PCs forward deployed to Manama, Bahrain, and is assigned to Task Force 55. TF 55 controls surface forces such as U.S. Navy patrol craft and U.S. Coast Guard patrol boats in U.S. 5th Fleet area of operations. U.S. 5th Fleet area of operations encompasses about 2.5 million square miles of water area and includes the Arabian Gulf, Gulf of Oman, Red Sea and parts of the Indian Ocean. The expanse comprises 20 countries and includes three critical choke points at the Strait of Hormuz, the Suez Canal and the Strait of Bab al Mandeb at the southern tip of Yemen.

He enlisted in the Navy in 1996, and was commissioned an ensign in November 2006. He has served on the carriers USS John F. Kennedy and Kitty Hawk, the frigate John L. Hall and shore stations as chief electronics technician for naval computers and telecommunication at naval stations in Jacksonville, Fla. and officer programs department head for the Jacksonville Naval Recruiting District.