Last series of the year will decide seedings in SEC Tournament 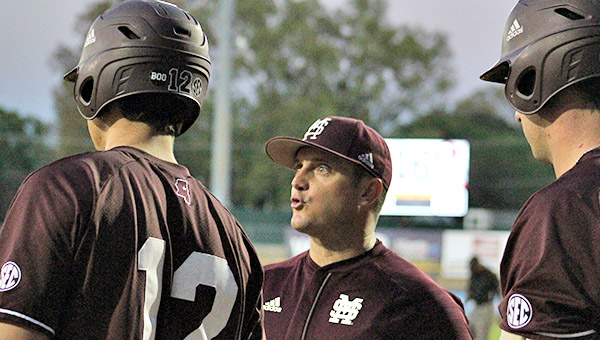 The week before the Southeastern Conference baseball tournament begins, the league’s playoffs are about to start.

At the top of the standings, Mississippi State, LSU, Florida and Kentucky will play each other as they try to secure one of the precious top-four seeds and a first-round bye in the tournament.

Arkansas and Texas A&M are playing in a series where the winner might be able to sneak into the top tier. Down another tier, Auburn, Ole Miss, Vanderbilt, Missouri and South Carolina are all playing for seeding.
The stage is set for a wild, wacky final weekend of the regular season across the conference.

“I’m so fired up for our guys, the way they have navigated the first 27 games in this league,” Mississippi State coach Andy Cannizaro said. “They have put themselves in a position to face LSU for a chance to win the SEC West. I think that is so freaking cool it’s unbelievable.”

The winner of each series will be guaranteed one of the top four seeds. Kentucky has won the last four series against Florida.

“We haven’t had a whole lot of success against Kentucky,” Florida coach Kevin O’Sullivan said in a story posted on gatorzone.com. “Obviously, the ultimate goal is to win a national championship, but this is one of the goals that we set out every year to do. I don’t think it’s going to be easy.”

Mississippi State and LSU come into the weekend from opposite ends of the spectrum. Mississippi State could have clinched a bye last weekend by sweeping its series at Georgia (23-30, 9-18), but lost two out of three to fall out of first place in the West.

LSU is coming off a series sweep of Auburn. It has won its last three SEC series, and nine of its last 11 games overall to sprint from the middle of the pack to the front.

LSU has won 11 of the last 13 series between the teams, and six in a row in Starkville, although Mississippi State won two out of three last season in Baton Rouge.

“The atmosphere at Dudy Noble Field is awesome, and we’re looking forward to a tremendous series with Mississippi State,” LSU coach Paul Mainieri said after the Tigers beat Northwestern State 9-3 on Tuesday. “Our players in past years have really embraced the atmosphere and performed at a high level. The LSU-Mississippi State rivalry has a long, rich tradition, and this weekend should be electric. It’s the type of weekend you want to be involved in as a college baseball player or coach.”

This weekend will have some extra oomph. Although it’s unlikely to be the last games played in Starkville this season — Mississippi State is expected to be a regional host in the NCAA Tournament — it will mark the formal goodbye to the current iteration of Dudy Noble Field.

The stadium will undergo a $55 million renovation in the offseason, and Mississippi State will mark the occasion with a groundbreaking ceremony before Saturday’s series finale and other festivities throughout the weekend.

“Obviously it’s a big weekend from an SEC standings standpoint. It’s a big weekend just from a Mississippi State standpoint, with it being the last series at the current Dudy Noble,” Mississippi State first baseman Brent Rooker said. “We’re expecting some really big crowds. We’re excited about playing a really good LSU who is hot right now and a game ahead of us. So we’re well aware of what it means for both our program and the SEC as a whole.”

Ole Miss endured a rough stretch in which it lost five straight SEC games, but rebounded last weekend to steal a key series with Texas A&M (35-18, 15-12). The Rebels were then shut out, 5-0, in a midweek game Tuesday at Arkansas State.

Auburn, meanwhile, has lost seven consecutive games, including series sweeps by LSU and last-place Alabama. They scored a total of four runs in the three losses last weekend at LSU.

“We have to have better at bats. The offense has slowed down some since the two weekends at Arkansas and Mississippi State,” Auburn coach Butch Thompson said after a 9-1 loss Sunday in Baton Rouge. “All around we’ve got to be a little better. This team will have to step up with some urgency at home next week with Ole Miss.”