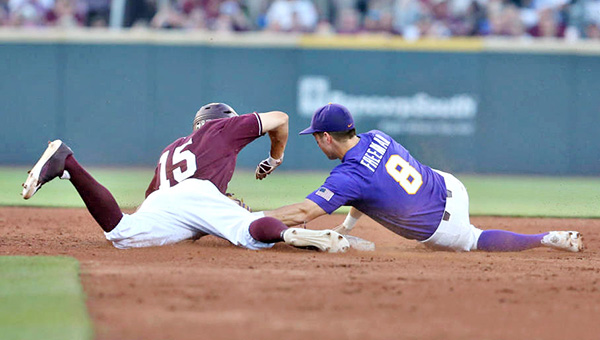 STARKVILLE — When the calendar turned to April, LSU was muddling through the early part of its Southeastern Conference schedule. By mid-May, the Tigers are right where they so often are — in first place.

The Bulldogs (34-21, 17-12) lost for the fourth time in five games, and have fallen out of the top four in the SEC standings heading into the last day of the regular season.

LSU, Florida and Kentucky have clinched three of the top four seeds.

Coomes hit a two-run double in the first inning as LSU jumped out to a 3-0 lead. After Mississippi State tied it at 4 in the fifth inning, the Tigers scored four runs in the sixth and three more in the seventh to take the lead for good.

Papierski’s home run was a solo shot in the seventh inning. Kramer Robertson had three hits and scored three times for the Tigers.

“It was a rough start,” Mississippi State coach Andy Cannizaro said. “They started scoring runs early and didn’t do a lot to score those runs. We battled in the middle innings and got things tied back up. In the sixth inning, we quit throwing pitches over the plate. You can’t beat a team like LSU when you give them that many walks.”