NFL star, Vicksburg native Butler happy to give back 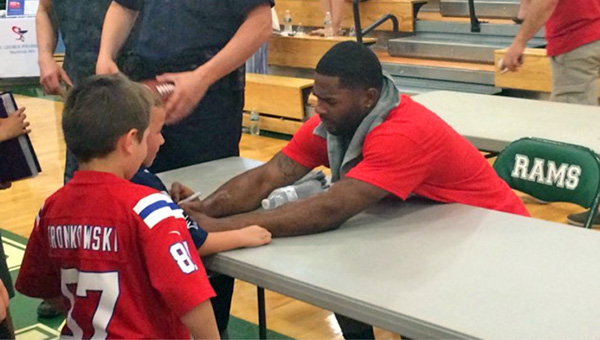 MARSHFIELD, Mass. — There is more to Malcolm Butler than playing football and making Super Bowl-saving interceptions.

The past couple of years, the Vicksburg native, Super Bowl XLIX hero and New England Patriots defensive back has also used his success and notoriety on the gridiron to give back to the community in which he was raised as well as those in New England.

With all that football has given Butler, he said helping his hometown when access to a basic necessity was limited was an easy decision.

“Growing up as a child, I didn’t have much,” he said. “I had people looking out for me, so I’m just doing vice versa here and trying to help out some other people. I’m blessed a lot with what I have, so why not give back to where you come from? It’s always good to give back.”

Since beginning his NFL career, the 2015 Pro Bowler has also hosted the annual “Malcolm Butler Football Camp” free of charge for children at VHS’ Memorial Stadium.

This year’s event will be held on July 15, and nearly 400 children are expected to participate.

“When I was growing up, we didn’t have an NFL player in my hometown,” Butler said, “but I always wished I could go to an NFL player camp. Because of that, I have one now, and I want the local kids to take advantage of it. I want them to come out and learn as much as they can. I’m just fortunate and blessed to be able to do that.”

In New England, Butler played in a fundraising basketball game in Marshfield, Mass., on Thursday to benefit the Marshfield High athletic boosters fund. Two weeks earlier, he partook in a similar event at Westwood High in Westwood, Mass., and has plans to participate in a few more in the coming weeks.

At the Marshfield event, Butler received the loudest ovation of any of the six Patriots playing in the game. He signed autographs and took photos while he met with fans for the duration of the 20-minute halftime session. During the game itself, the 5-foot-11, 190-pounder dunked on several occasions.

From a football perspective, this offseason has been a unique one for Butler.

Ultimately, he will enter his fourth season with the Patriots despite having a multi-year deal in place with the New Orleans Saints as a restricted free agent. Since the Patriots owned Butler’s rights, they blocked the deal by placing a first round tenure on Butler — which would have required the Saints to surrender the 11th overall pick in the NFL draft this year for the right to sign him. Instead, the Patriots retained him on a one-year, $3.91 million deal.

The Patriots’ move cost Butler several million dollars this upcoming season, but he will have an opportunity to win his third Super Bowl (the Patriots are favored to win Super Bowl 52, according to Westgate Las Vegas SuperBook) and test the open market next winter.

Even if it was a frustrating process, Butler said it is something he cannot worry about now.