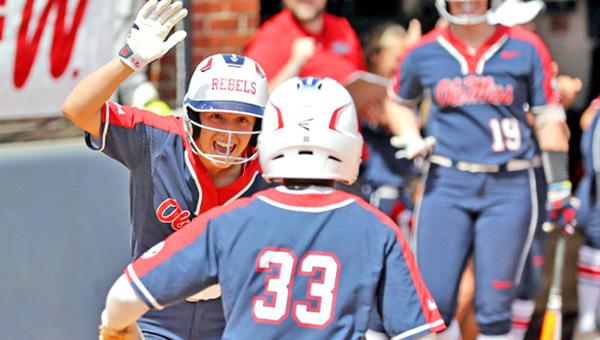 OXFORD — The Ole Miss softball team is at it again.

Another stellar performance from pitcher Kaitlin Lee, and a string of three extra-base hits in the sixth inning, lifted Ole Miss to a 2-0 win over No. Arizona State in the winner’s bracket of the NCAA Tournament’s Oxford Regional on Saturday.

The Rebels (42-18) secured a spot in Sunday’s regional final against North Carolina, needing just one win to advance to the super regional round for the first time in school history.

“Being able to play against Oklahoma last year, which was the eventual National Champion, gave us a lot of the experience. It helped with our poise,” said Ole Miss coach Mike Smith, whose team lost to Oklahoma in the regional final last season. “Even though they beat us up in this game last year, we fought in that championship game last year. We knew what it was going to take. We knew that staying in the winner’s bracket, we create our own destiny.”

Ole Miss has won six consecutive games in the postseason, thanks largely to the dominant pitching of Lee.
The junior right-hander allowed three hits and one walk in a complete-game victory. Lee has thrown every pitch for Ole Miss during the Southeastern Conference and NCAA tournaments.

Lee (22-10) has thrown back-to-back shutouts in the regional — the first was an 8-0 win over Southern Illinois on Friday night — and allowed a total of three runs in her six postseason starts.

“It was not my best game or my best stuff. If the cameras were on me at all, you would have seen I went in the fourth, fifth, sixth and before the seventh inning to the bullpen to work on my stuff,” Lee said. “The pitches were not moving on those harder hits that they got. So for every hard hit that they had, I would come in and work on that pitch to make sure it was moving. We tend to attack everyone the same way. We stick to our strong points, and it seems to be working out for us.”

Arizona State pitcher Dale Ryndak was also sharp. She shut the Rebels out for five innings before they finally torched her in the bottom of the sixth.

Elantra Cox led off the inning with a triple over the head of right fielder Brynley Steele, and then scored the game’s first run when Kylan Becker followed it up with another stand-up triple.

Miranda Strother joined in on the rally two batters later with a double to right-center field, bringing in Becker to make it 2-0.

Arizona State (31-22) dropped into an elimination game with North Carolina later Saturday night, which it lost 3-2, while Ole Miss got to rest up for arguably the biggest game in the program’s history against the winner Sunday afternoon.

Lee was thankful for the rest, but also chomping at the bit to get back in the circle.

“It is wonderful. I would have been ready, of course. It was great. They always seem to have my back at the most important times, and I love that about them. It is wonderful to think that we can just win one and advance,” Lee said.