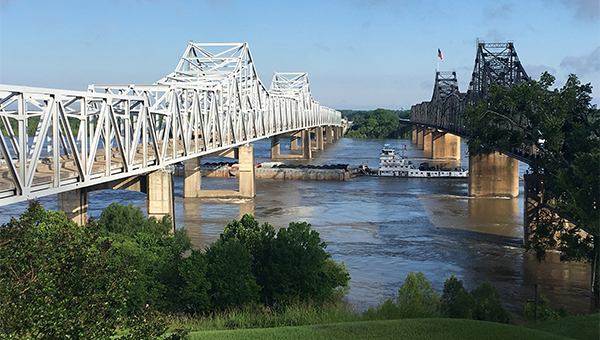 A towboat pushing a tow of 14 barges struck the Old Highway 80 bridge in Vicksburg at 3 p.m. Tuesday.

Following the strike, a block of eight barges, and another group of three barges, broke loose from the towboat and began floating southbound down the river. The towboat remained attached to the other three boats following the collision.

Petty officer Erik Brehaut with the USCG Sector Lower Mississippi River said that the 11 boats were all corralled and pushed onto the left riverbank by 4:30 p.m.

“There were a bunch of assist boats that came down from the fleeting area on the Yazoo and they got down there pretty quick and helped them out, and got the barges pushed up on the bank,” Brehaut said.

The towboat, named the Graestone Express, is owned by Graestone Logistics out of Murray, Kentucky and the 14 barges were all carrying either grain or coal.

The river was temporally closed to all merchant and vessel traffic following the collision before being reopen at 10:30 p.m.

Bridge commissioner Herman Smith said the bridge passed inspection and was cleared Tuesday at 7:30 p.m. following the collision. The bridge was closed to rail traffic from 3:05 p.m. to 7:30 p.m. when it was cleared to reopen.

The river crest was raised from 48 feet to 49 feet by the National Weather Service Tuesday. In January 2016, when the river crested at 50 feet, four boats collided with the bridge in a seven-day period forcing the Coast Guard to close the river to barge traffic.

Calls to Graestone Logistics was not returned.

11:00 a.m. update Repairs have been completed on the valve that connects the city of Vicksburg water system to the... read more